Cape Adare is the point where the Ross Sea coast becomes the coast of East Antarctica. A high rocky peninsula sticking out into the Southern Ocean. You will expect that such an obstacle will catch any winds, clouds and drift ice fields in the area, and there is a lot of all of this.

Accordingly, you have to be ready for everything when you are getting near Cape Adare. Hope the best, be prepared for the worst, this has always been the way of thinking for polar travellers, at least those who knew something about the environment they were about to visit, and this has not changed until today.

Admittedly, I had nevertheless high hopes for a successful landing at Cape Adare when it became visible on the horizon. One of the big, historically well-known placenames in Antarctica, the geographical guard watching over this entry into the Ross Sea, discovered January 11, 1841, and even this old reptile, one of the finest mariners of his times, did not get ashore: „ … the wind being on the shore, and a high sea beating heavily along the pack edge, we found it quite impracticable.“ But he did certainly like the scenery: „It is a remarkable projection of high, dark, probably volcanic, cliffs, and forms a strong contrast to the rest of the snow-covered coast. … It was a beautifully clear evening, and we had a most enchanting view of the two magnificent ranges of mountains, whose lofty peaks, perfectly covered with eternal snow, rose to elevations varying from seven to ten thousand feet above the level of the ocean. The glaciers that filled their intervening valleys, and which descended from near the mountain summits, projected in many places several miles into the sea, and terminated in lofty perpendicular cliffs. In a few places the rocks broke through their icy covering, by which alone we could be assured that land formed the nucleus of this, to appearance, enormous iceberg.“ 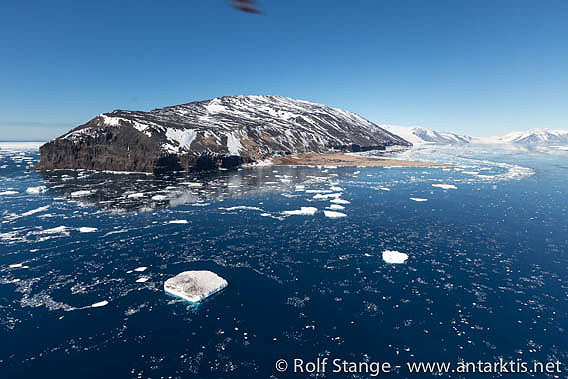 How incredible it was for us when even the morning’s gentle breeze calmed down while we were approaching the famous headland – under a brilliantly blue sky. None of those few whom I know and who have been there will ever believe that. Just a dense belt of drift ice between Ortelius and the dark cliffs, so we’ll get the helicopters out. If good old Ross had seen that!

The shore of Cape Adare consists of inaccessible steep cliffs, and the actual landing site is a little, flat peninsula on its western side. A triangle of dark gravel, of volcanic origin and piled up to a series of beach ridges by the everlasting surf, with some small, long lagoons between them. The white-blue icebergs and densely packed ice floes, all swimming in darkblue, calm water, are a view of unearthly beauty from the air, from where we could also already see the immense number of penguins crowding most parts of the peninsula. Ridley Beach, as it is called, is home to one of Antarctica’s largest colonies of Adélie penguins, if not the largest one. 250,000 breeding pairs are mentioned in the literature, good for well beyond half a million individuals. Considering this, we are soon finding surprisingly large areas with few or no nests at all, maybe there is too much snow there in the beginning of the breeding season. On the other hand, many o f the Adélies are climbing up high onto the adjacent cliffs, reaching up to 300 m with their nesting sites. First class views, but the weather protection leaves a bit to be desired, and I don’t even want to imagine the struggle they have to go through to provide their chicks with every single meal.

People develope weird habits when there are too many of them in little space, and so do penguins. In 1911, when of Scott’s biologists spend a while at Cape Adare, making some remarkable observations. His paper about the „sexual habits of the Adélie penguin“ was deemed too bizarre for publication. It has been dug out again a century later, believed to be accurate and published only in 2012 in Polar Record. An interesting read. 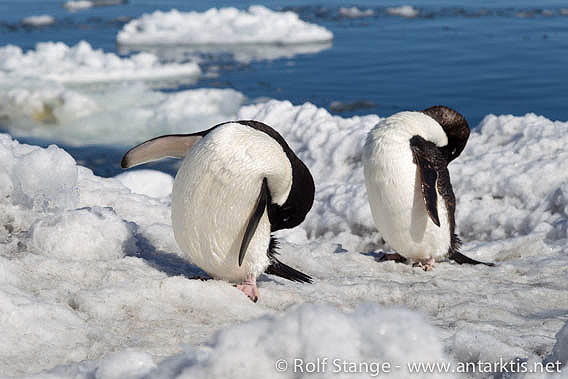 Not only wildlife is teeming at Cape Adare, people have also lived here once for a year. This was Carsten Borchgrevink’s wintering in 1899, crowded together with 10 men in a far too small hut with far too little to keep them busy, leaving far too much time to make life hell for each other. But they were the first ones ever who wintered on the continent of Antarctica. The hut is still there, it is the very oldest one in Antarctica, an icon of polar history, and the only building on this planet that can claim to be the very first one on its continent ever.

Hundred thousands of penguins and other assorted wildlife, antarctic scenery on the highest level, the oldest hut of the continent – it is safe to assume spirits were high as we returned back to the ship after a long afternoon out there. The welcome greeting by our great hotel team is icecream and hot wine on the top deck to celebrate the day. Ice in your hand, ice around the ship, ice everywhere shining under a still bright evening sun. It is our last day near the antarctic coast. Once again, Antarctica has shown us how beautiful she can be, and pulled on all strings to do so. 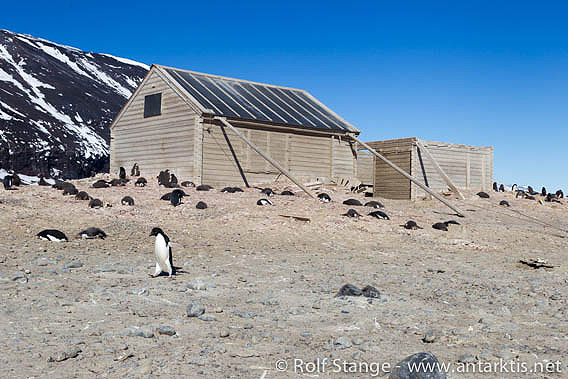