Admittedly, the final leg of our voyage was not what we had been hoping for. We had pictured some beautiful sailing in subtropically calm waters and a nice final stop on the island of Chiloë. Instead, we got one last beating by the weather. Winds around 30 knots (40 in gusts) and straight on the nose, of course. The Golfo de Corcovado did not give us whales and views of volcanoes, but maritime Rock’n’roll in shape of some rough seas, a lot of rain and speed that went down to 1.8 knots at time. Not quite what we wanted. (Addendum: in Puerto Montt, the crew found parts of ropes and fishing nets on the propellor. That explains of course why we made so poor speed when the wind was against us!)

Things improved significantly during the last morning: the wind changed direction and thus its character from a pain in the rear to the sailing wind that we had been hoping for. The sea calmed down, and we picked up speed to make 7-8 knots between Chiloë and some smaller islands towards Puerto Montt. After the wild, lonely landscapes further south, it seemed pretty civilised around here: many smaller and some larger settlements on the islands and more ships than we had seen before in many days. Penguins, pelicans and sea lions were with us on the last miles.

We went alongside in Puerto Montt only a few hours behind schedule, and a really great, beautiful and interesting voyage came to an end, which was duly celebrated with fresh apple cake made by Julie. I am pretty sure that I speak for everybody when I say that we would have loved to continue together. There are so many more Caletas in Patagonia …

But as it was, we said goodbye and farewell. Many big thanks to all fellow travellers, to skipper/boat owner Heinz Wutschke and his good crew, Astrid, Julie and Piet for many stunning days on the back side of Patagonia!

No doubt, this is to be continued. In 2019, we have already got Scoresbysund in east Greenland with Anne-Margaretha on the schedule. There has already been talking about other parts of east Greenland or Lofoten for the future, and I am sure this is not to be the last time in Patagonia! It was far too beautiful for that, and there are so many more places to discover in this stunning part of the globe.

So this is the end of my polar blog for the moment. The author will continue his arctic adventures for a couple of weeks in the book writing factory (yes, there are projects going on). Thanks for reading so far, and see you again when the arctic season starts with Antigua!

As if a sunset on a calm fjord between many islands was not already a show of perfect beauty. How does it get even more beautiful? Dolphins.

On Isla Canal, we invented the term „three-dimensional hiking“ because we were moving in the dense forest somehow in a diffuse matrix of branches, bamboo, rotten roots and surprisingly large cavities between them. A very gradual transition from the mostly air-filled space at the top and the more or less solid bottom. Often less solid.

According to the weather forecast, we should now have had lovely sailing wind from the south. In reality, we are crossing up north against the wind and some rather rough seas. Still 180 nautical miles to go to Puerto Montt. We will see.

Happy Easter! The anchor went down late night. Which was great, we had been sailing for quite some time since we had left our anchorage at the Isla Jungfrauen. And it was good to get to walk again on solid ground! Nature has almost got a tropical aspect, it is so green and lush, big fern trees are growing everywhere like palm trees, and parrots are making a lot of noise. 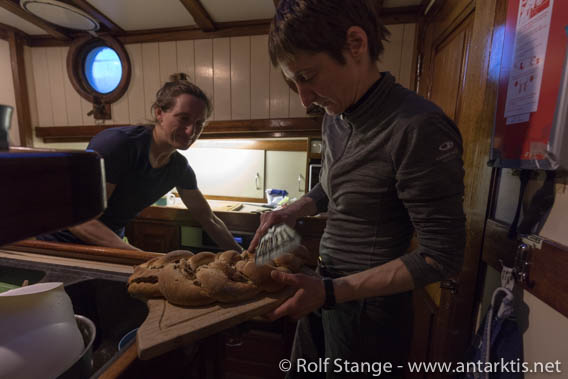 Our own Easter bakery at work

A second landing takes us to some hot springs, the Termas de Punta Perez. It used to be an unknown place in the wilderness until a few years ago, now tourism has left obvious traces. We are obviously getting into more civilized waters again, Puerto Aysén is not too far away and tourist boats and fishing vessels are crowding the waters. 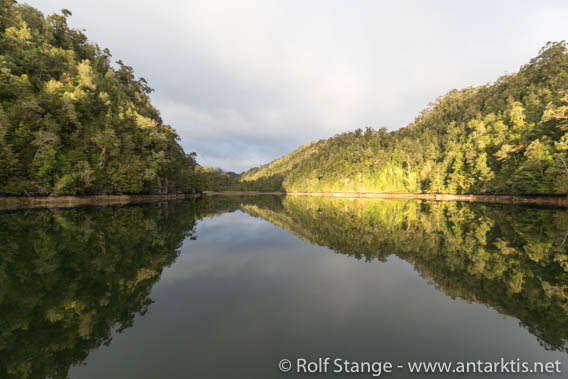 The hot springs do not form natural hot pools. It is hot groundwater coming out between the stones, so you can burn your bum as you sit in shallow water while your feet get frozen at the same time. It is not really that tropical yet! 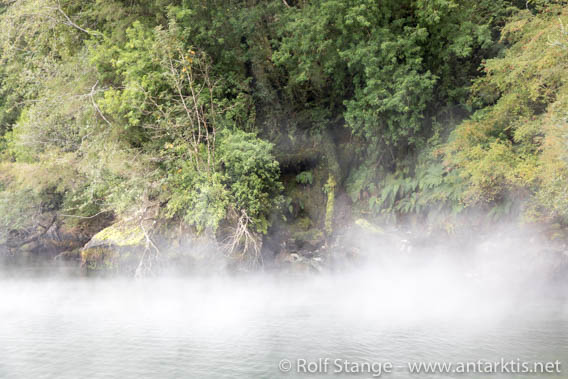