The Drake Passage and Cape Horn

Cape Horn is projecting into the Drake Passage at 55°59′S/067°17′W, marking the boundary between the Atlantic and Pacific Oceans and the northern end of the Drake Passage. Although it is a bit more tricky than that: geographically speaking, in terms of the coastline of the continent, the southern end of South America is much further north, on the northern side of the Strait of Magellan. Everything between this strait and Cape Horn is islands. And talking about islands, there are some tiny dots of land about 60 nautical miles southwest of Cape Horn, the Diego Ramírez Islands. But no reason not to be amazed in case you get to see the famous Cape Horn!

Which was first seen by the Dutch navigator Willem Cornelisz Schouten, Captain of the Eendracht which belonged to the Dutch trading company Austraalse Compagnie in the city of Horn. This is the easy and true explanation for the name of the Cape (written Kap Hoorn in Dutch and German) – if you Englishmen are still reading rather than steaming and thinking about beating this author up, who does not give Sir Francis Drake the credit for having discovered Cape Horn. But we simply don’t know if Drake was ever as far south as that. If he was, he did not document it well (which does not have anything to do with the order he received from his Queen to keep his mouth shut about this important discovery, that’s no excuse). So … sorry. I’ll leave it up to the real historians from here on. 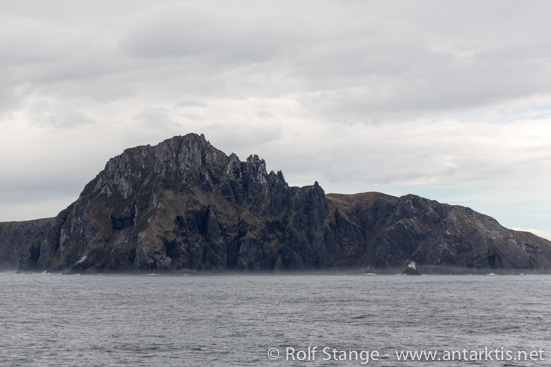 Cape Horn on a nice day.

Of course we will never really know for sure if there were other European navigators blown off course and as far to the south as the Cape. In 1525, Francisco de Hoces from Spain is said to have been somewhere around Cape Horn, which is the explanation for the Spanish name of the Drake Passage: Mar de Hoces. But my impression is that this name is not being used a lot. 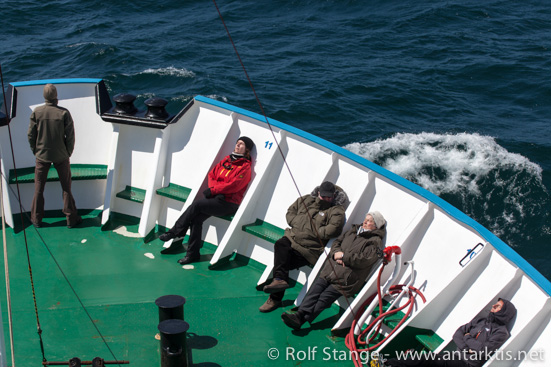 The Drake Passage on a nice day.

All this did not keep Drake’s famous fellow countryman James Cook in 1769 from naming the sea south of South America after the famous privateer. It is not the bad reputation of the pirate’s name that makes tourists shiver still today when they hear the infamous name of the 440 nautical miles wide passage between Cape Horn and the Antarctic Peninsula, respectively the South Shetland Island. The crossing of the Drake Passage is not always very pleasant, as strong low pressures are constantly circulating around Antarctica and thus regularly passing through between the Cape and the Peninsula. It is a bit of a lottery unless you have time to wait in protected waters in case there is one on the way, but ships usually don’t have time. But it does not have to be so bad at all: there is reasonably calm weather for several days between the storms, and often, the Drake Passage is much calmer than people usually expect. It can really be flat-calm! Waves calm down quickly, and after 1-2 days even the swell is gone, and then you could kayak across the Drake Passage … or at least a few miles of it. But the next storm might be just around the corner, so it’s better to use something slightly bigger than a kayak. But on the other hand, it is a myth that the Drake Passage is always rough, as the waves are squeezed into the narrow passage between South America and Antarctica. Simply not true. If there is no wind for some time, there won’t be waves and finally not even swell, just as with any of the world’s oceans. 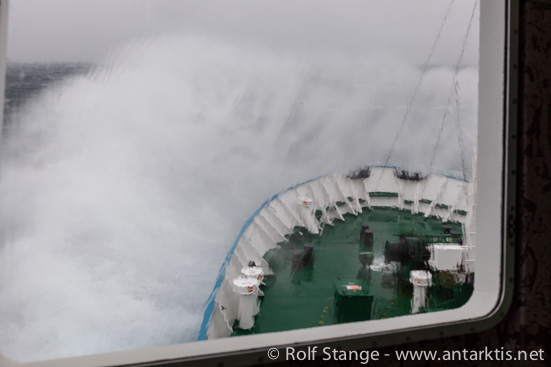 The Drake Passage on a not so nice day.

Depending on ship, weather and route, the crossing which makes the beginning and the end of many Antarctic trips takes usually 1.5-2 days. This involves crossing the Antarctic Covergence, and important oceanographic boundary separating cold antarctic waters in the south from more temperate northern waters. This boundary is nothing you can point at, it is actually a transition zone of many miles, shifting its position to the north or south with the ever-present turbulences of the currents. But it is warmer in the northern part of the Drake Passage than in the south. Surprise … 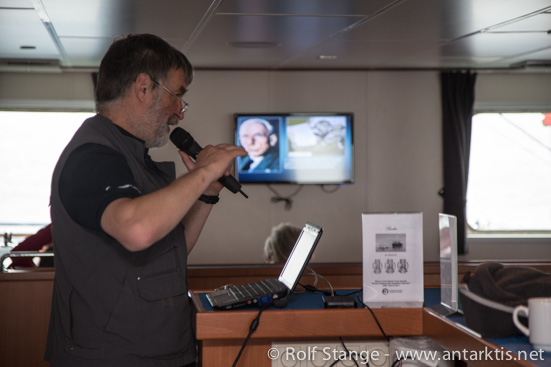 The well-known sailor Henryk Wolski is telling the tales of the Antarctic explorers during a crossing of the Drake Passage.

In other words, the crossing can actually be quite pleasant (but it isn’s always): the ship’s lecturers are keeping you busy with lectures and you can watch out for Albatrosses and other seabirds and dolphins, and there is usually quite some of them around, especially near South America. And maybe they even put “Around Cape Horn” on in the ship cinema, the famous film made in 1929 during the journey of the great sailing ship Peking on her voyage from Europe around Cape Horn to Chile. It will make you happy that you are on a bigger ship (supposing this is actually the case) and you don’t have to climb up the rigging to work sails (supposing this is not the case). 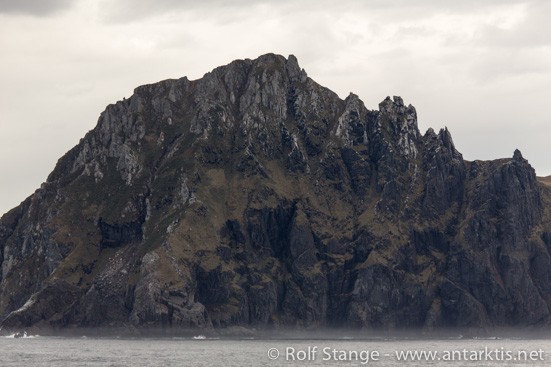 And once again, as it is so nice: Cape Horn on a nice day, a bit closer.

The drawback is that you might not see Cape Horn at all during an antarctic voyage: it is about 40 nautical miles west of the direct route between the Beagle Channel and the South Shetland Islands, and you will sail this bit during nighttime on the way down south. Only on the way north again, the last day before you get back to Ushuaia, when there is time and the weather for it, the expedition leader will try to talk the Captain into going near Cape Horn, to get at least a glimpse of it. And forget the nagging of some South American islands being even further south: on one of those rather rare, beautiful days, it is simply an impressive sight. 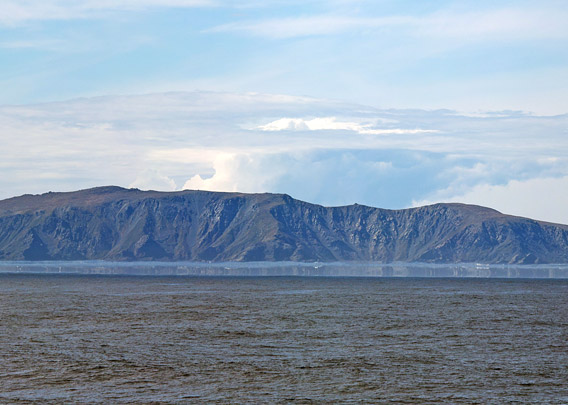 Kap Hoorn – 1/2 – the whole Cape Horn archipelago, seen from the south. The conspicuous line between land and see is a mirage (“Fata Morgana”). No 360° panorama, only works with the Flash Player on mobile devices, for example, with the → Puffin-Browser. 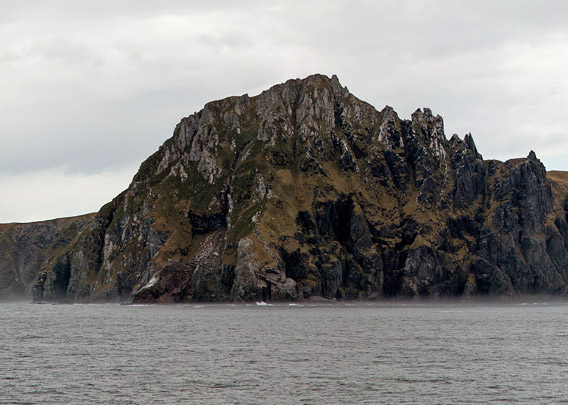 Kap Hoorn – 2/2 – No 360° panorama, only works with the Flash Player on mobile devices, for example, with the → Puffin-Browser.