Antarctica under sail with SY Anne-Margaretha

It had been a long-time dream to see Antarctica under sail, on a small boat. Now, this dream is already history. For some weeks, it was reality! The triplog (click here to download the pdf-file (15.6 MB), German only), the blog and the pages with the photo galleries (links below) tell the story.

I want to thank everybody who was part of it, making the trip the great experience that it really was. Best of spirits whatever wind we had! First of all, of course, I want to thank our skipper (and boat owner) Heinz Wutschke, his good crew and his great boat, SY Anne-Margaretha, for taking us to Antarctica and back in safety and giving us many great, unforgettable days full with experiences and impressions that will stay in our minds forever. Treasured memories! 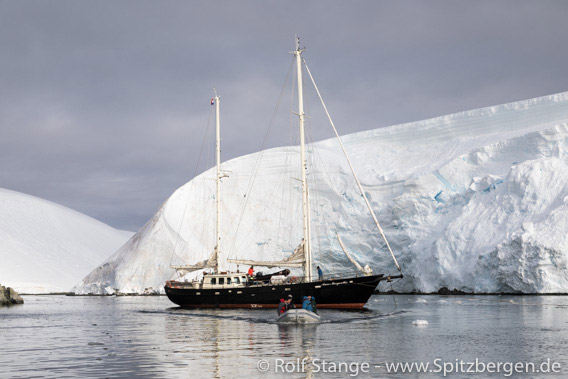 Gallery 1: Ushuaia and the Drake-Passage

It took us two attempts to really get on the way, but then it went smoothly. We got a quick and as-smooth-as-can-be ride across the Drake-Passage. Three days! Remember, the Anne-Margaretha is not a speed boat. But strong, safe and as comfortable as any sailing ship could be in these waters.

The crossing brought one of Antarctica’s rarest wildlife sightings: Orcas, but not just any Orcas. Type D Orcas, rarely seen. We saw them. We even got some photos.

Deception Island was our first destination in antarctic waters. The first attraction was actually a safe anchorage, after the crossing. And our first antarctic impressions. Deception Island is, of course, not actually representative for Antarctica, but it is a fascinating place with its rather bleak volcanic landscapes. The weather was quite appropriate! And we got our first impressions of antarctic wildlife and a relatively rare visit to Base Decepcion.

We came closer to antarctic reality on Livingston Island, where we saw our first colony of breeding Gentoo penguins and other animals including Elephant seals amidst a landscape that came much closer to our ideas of Antarctica.

Here, where most other ships spend a few hours, we stayed for two days! And it was worth it! Even though this extended version of an excursion to these islands and waters actually happened rather than being planned. But who would want to have missed out on the lovely and calm harbour next to the old wreck of the whaling ship? With excited Antarctic terns coming back and forth with food as neighbours? The excursion around Enterprise Island in the small boats? Spending time with Humpback whales? The long stay on the small island? So many people say „I could stay here for hours.“ But nobody actually does it! Well, we did. Well – scenery, weather … it couldn’t have been any better!

The following passage of Wilhelmina Bay with dozens of Humpback whales was the next highlight and definitely an experience that will stay as a treasured memory.

At Waterboat Point, we got our first chance to step on the antarctic continent. At least with a bit of good will and at low tide  unbelievable that two young fellows wintered here in the early days in a hut that mainly consisted of a rowing boat turned upside down! The Chileans who stay here today in their relatively modern station enjoy more comfort, for sure. With a white Gentoo penguin in the neighbourhood!

We got a landing on the continent without any doubting and questioning at Almirante Brown in Paradise Harbour. Later, Port Lockroy brought first of all a lot of wind and hence a day of rest that had not really been in the plan initially. But a day later we enjoyed a long landing with breeding Gentoo penguins at Jougla Point and a short visit to the „living museum“ of Port Lockroy.

The passage of Neumayer Channel, as beautiful as it was with the best of weather you could imagine, was nevertheless already almost a bit sad, because it was … northbound. Decidedly the wrong direction! But we got a final stop and landing in the Melchior Islands to say goodbye to Antarctica.

Just in case anyone was not clear about the true nature of the Drake-Passage, now it became unmistakably clear. It started actually quite nice, with sun and a real Drake Lake. But later, we got our share of wind, as we had it straight on the nose for four days. The real thing! Which was, in its very own way, definitely an experience in itself. Some of us discovered that they were real seamen and could hardly get their hands off the steering wheel. Others preferred to hold on to a bucket at least for a while. But in the end, we got all used to the sea!

The Chileans did not really want to welcome us in their small settlements on Navarino Island, but we got the best dolphin show ever in exchange. No complains 🙂 after a last day of strong winds in the Beagle Channel, an overland trip to Harberton was the right thing to round it off. Green landscapes, blue sky, white clouds. Stunning scenery and an interesting destination.