If you can picture our house nestling below this small hill on a long stretch of black sand, with many tons of provision cases ranged in neat blocks in front of it and the sea lapping the ice-foot below, you will have some idea of our immediate vicinity. As for our wider surroundings it would be difficult to describe their beauty in sufficiently glowing terms. Cape Evans is one of many spurs of Erebus and the one that stands closest under the mountain, so that always towering above us we have the grand snowy peak with its smoking summit.

This is how now less than Captain Robert Falcon Scott himself described Cape Evans in his diary, later published as Scott’s Last Expedition (Vol. I, page 101. Edition “intended for circulation only in India and the British Dominions over the Seas”).

The hut at Cape Evans on Ross Island is one of the treasured holy grails of Antarctic history. It was built during Scott’s final expedition with Terra Nova (1910-13). Scott and 4 other men reached the South Pole on January 17, 1912 – about 5 weeks after their Norwegian competitor Roald Amundsen. On the return journey, Scott and his 2 remaining comrades starved and froze to death in their tent during a blizzard on or around March 29. Their frozen bodies were found by other expedition members in November the same year. The diaries were returned and edited; precious reading for all aficionados of south polar history!

Scott was influenced by Royal Navy traditions and thus had separate quarters for lower ranking crew in the first part of the hut and officers and scientists in the further part. One century later, this may appear odd to us, but it seems as if nobody ever complained about it. Everybody could behave the way they were used to amongst their likes, and people seemed to be happy with it. 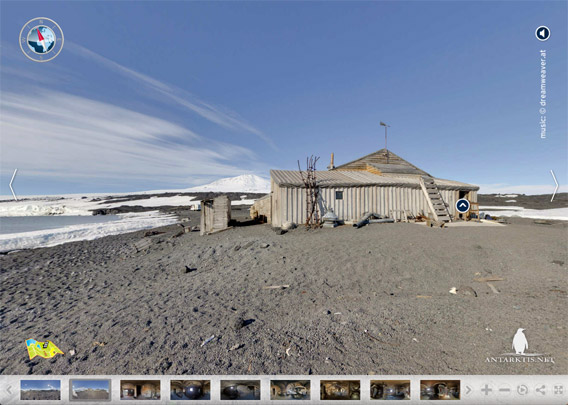 Once you have started the virtual tour, you can either use the map in the lower left corner to navigate inside the hut, or the bar at the bottom, or click on symbols within the panos to enter the next one (only while the next location is visible, not always available). Or you can just let it play and it will automatically switch to the next pano after one turnaround. You can switch the sound off (upper right corner) if you wish, same with the explanatory text.

You can also view this virtual tour on iPads and other tablets if they are powerful enough and have an up-to-date systems software. On desktop systems, you can use both HTML5 or Flash. 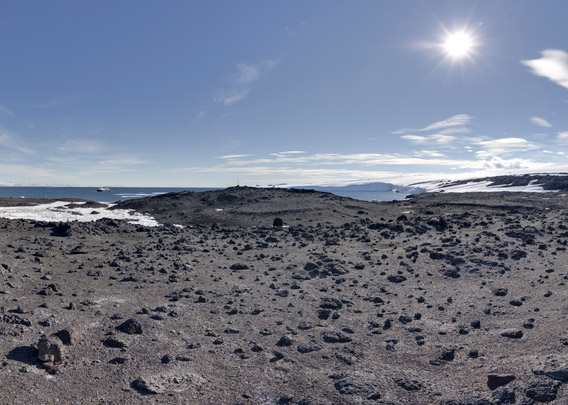 Cape Evans is a little peninsula at the foot of Mount Erebus, the southernmost active volcano on Earth. The cape consists of dark lava rocks without any vegetation. From this little hill, we have got a clear view southwards: the way Scott went on his last expedition (1910-13, with Terra Nova). He and his 4 comrades would never return. 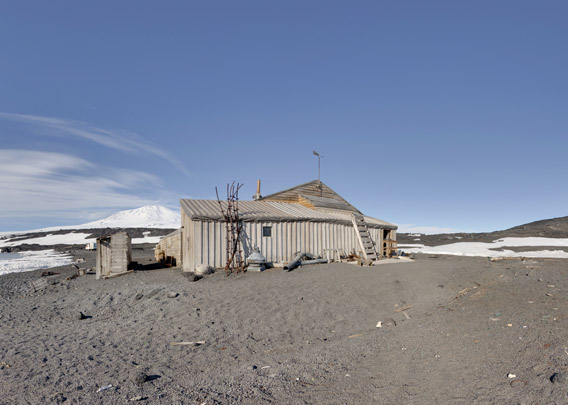 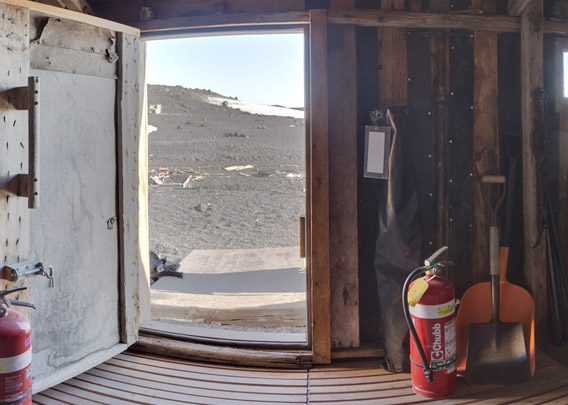 The hut is quite spacious (15.2 x 7.6 metres). A corridor is leading towards the stables. The entrance area smartly protects the main room from wind and snow. 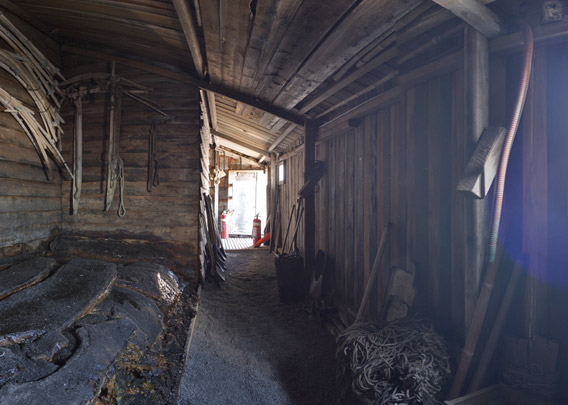 The corridor to the stables leads around a corner, where a pile of seal blubber was stored. The smell of blubber is still in the air. 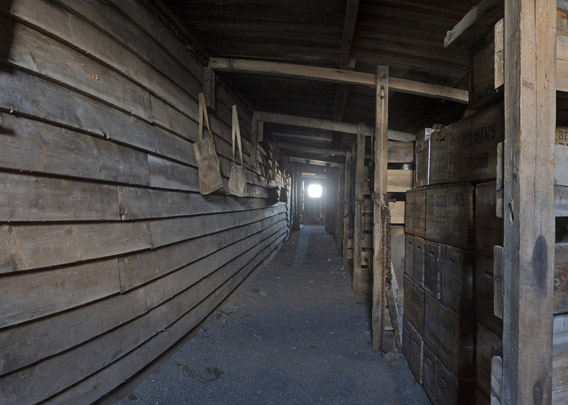 The stables is a long corridor with stalls for the individual ponies on the northern side. Scott’s choice of transportation methods has always been a matter of debate. With the ponie stalls, ponie snow shoes on the wall, a bicycle and remains of a dog, a large part of the spectrum is represented here in the stables. (The bike belonged to Griffith Tayler, he used it in the vicinity).

You can still smell the hay! 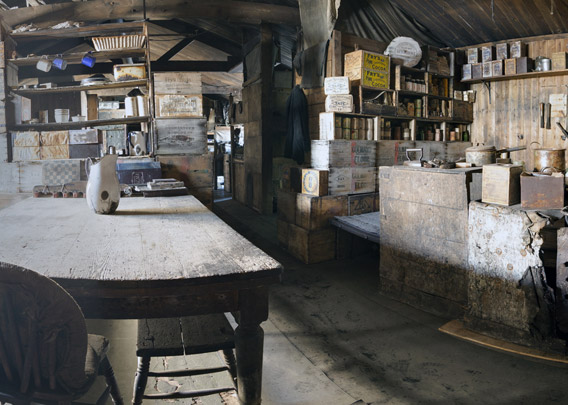 The main room is separated into several parts. Near the entrance, the kitchen is on the southern side and beds for the men with lower ranks on the opposite side. This reflects the hierarchical leadership style of the navy officer Robert F. Scott. 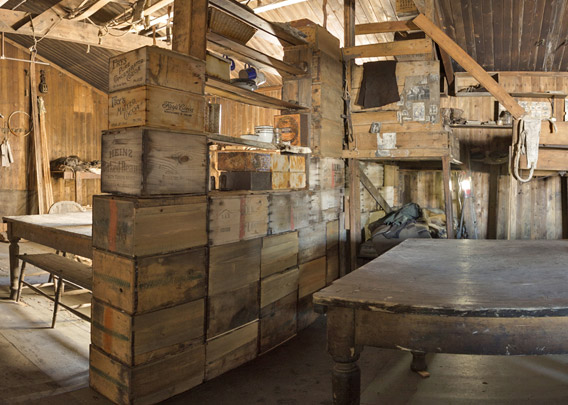 The central part of the main room was called the tenements, this was where the officers were housed. A wall of boxes separated the tenements from the first part, where the lower ranking men slept. The strict separation was welcomed by everybody: this way, they were all amongst themselves and could behave as they wished and as was common amongst their ranks. 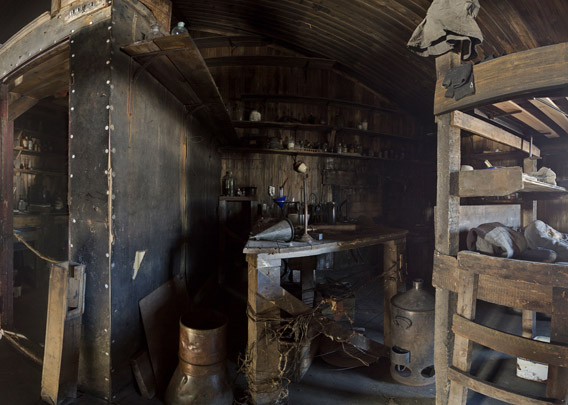 Next to more beds for officers, photographer Herbert Ponting’s darkroom was located here, together with some space for the scientists with little laboratories. A second, smaller stove provided warmth for this part of the hut. The stove pipes were smartly laid under the ceiling through the whole hut. On the dark room wall, there was a telephone which connected this hut to the older Discovery hut at Hut Point further south in October 1911. The cable was laid across the sea ice and did not last long, however. 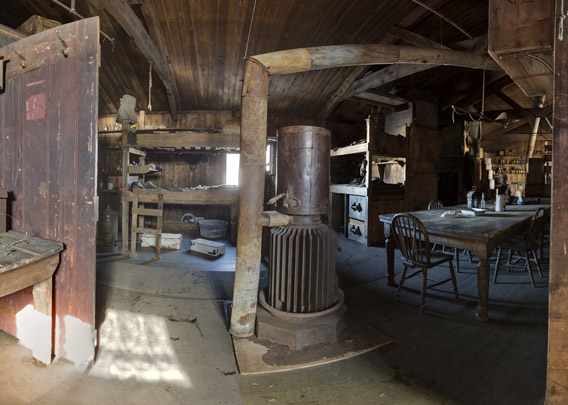 In the rear part of the main room, left (northern) side, there are two half-separate cubicles. The furthest one, next to Ponting’s darkroom, was used by Edward Wilson, who died with Scott, and Edward („Teddy“) Evans, second in command. An Emperor penguin is lying on the table, certainly not left there by Scott.

Opposite of Wilson’s and Evan’s, Robert F. Scott had his own little cubicle. A sleeping bag is still lying on the bunk. (The last one to sleep there, as far as known, was Aeneas Mackintosh, commander of Shackleton’s Ross Sea party of his „Imperial Trans- Antarctic Expedition“ in 1914-17). 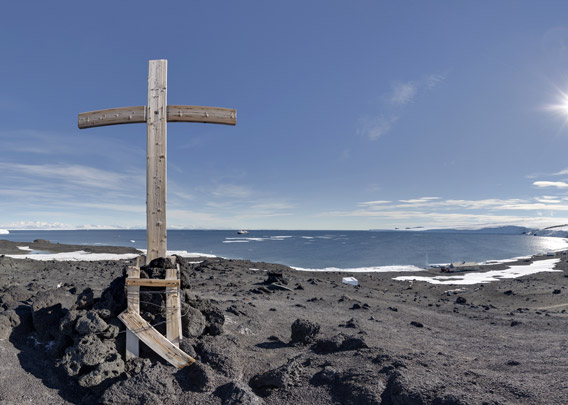 Later, Scott’s hut at Cape Evans was used by the Aurora expedition from 1914 to 1917. That was Shackleton’s Ross Sea party, a vital part of his projected crossing of Antarctica during his „Imperial Trans-Antarctic Expedition“. The Ross Sea party was supposed to lay depots for Shackleton and achieved this under dramatic circumstances. Three men died during this expedition: Aeneas Mackintosh, the commander, Hayward and Spencer-Smith. The cross on the hill close to Scott’s hut is a memorial to these 3 men who died during their efforts to lay depots that would never be used: Shackleton’s Endurance sank in the Weddell Sea, on the other side of the continent, before he could start his crossing.