Part 2 of 4: Peter I Island and the Amundsen Sea 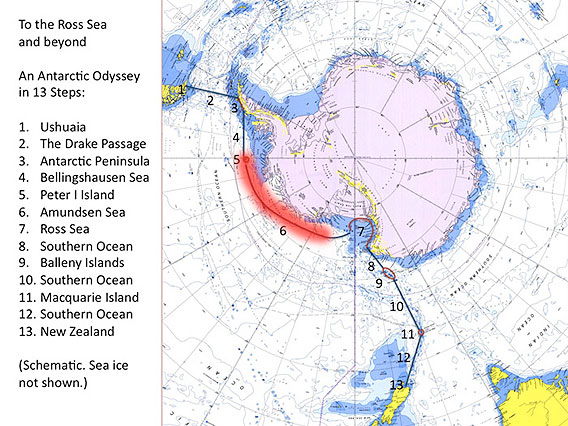 The Bellingshausen Sea turned out to be grey, but calm. The atmosphere got more and more intense as Peter I Island came into distant view as a far shadow on the horizon, as only a few hundred people have set foot on this rugged, ice-covered island since its discovery. The weather on the day of our visit turned out to be better than it usually is: we had largely good visibility at sea level and beyond, occasionally even allowing views of the rarely seen peaks, towering a good 1600 m above the surrounding sea. This was the time to put the helicopters into use for the first time, allowing us to set foot on the low ice cap near the northern tip of the island.

In the end, Peter I Island looks quite similar to many other islands which are closer to the coast of the Antarctic Peninsula. Frankly said, hardly anyone would care about those islands close to the Peninsula which are similarly inhospitable as Peter I. So why would one go there and land on it? I guess the reason is the same as the one that made Hillary climb Everest: simply because it is there …

The further passage towards the Ross Sea took quite some extra miles, as we happened to have a heavy ice year, and we had to sail as far as the date line (180° longitude) to cross the drift ice into the ice-free inner Ross Sea. This cost obviously time, something near 3 days. This time was, however, not completely wasted; next to the enjoyable passage of the ice seas itself and an altogether quite impressive set of lectures (lecture list is included in the triplog), we went for a Zodiac cruise into the ice and a helicopter flight above it. The elusive Snow Petrel was around in substantial numbers, and most of us were even lucky enough to see a Ross Seal, which I guess is the seal species which is most difficult to see on Earth. We saw it only once, and not all of us were lucky enough to be out on deck at the right time.

Peter I Island and the Amandsen Sea (gallery)