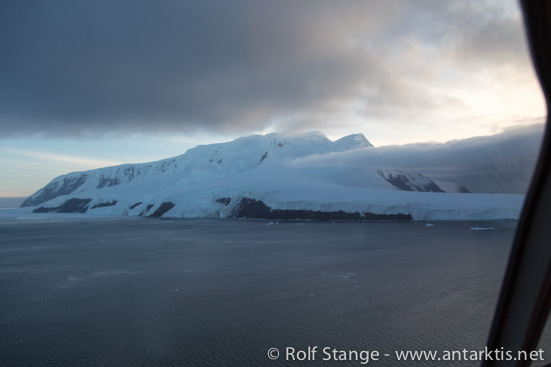 Approaching Peter I Island with helicopter.

Peter I Island: in the centre of remoteness

In an Atlas of remote islands (Schalansky 2006), Peter I Island managed to get on to the most honorable page: the very last one. And the author’s claim expressed in the subtitle of this book, fifty islands I have never been to and I will never get to, certainly holds true for, well, essentially everybody. And why would anyone want to go there? To be honest, if Peter I Island was close to the coast of the Antarctic Peninsula, then it would be one island amongst hundreds, and nobody would ever take notice of an island so inaccessible, which does not have much beyond its remote position. 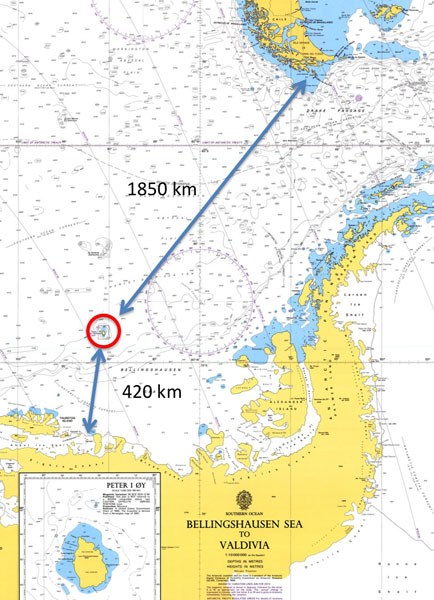 Position of Peter I Island in the Bellingshausen Sea, Antarctica.

The nearest coast is about 420 kilometres away, and this is Ellsworth Land in western Antarctica, a completely uninhabited coast, almost always hidden behind hundreds of miles of dense pack ice. It is 1850 kilometres to South America – not to the pubs of Punta Arenas, but to Cape Horn. 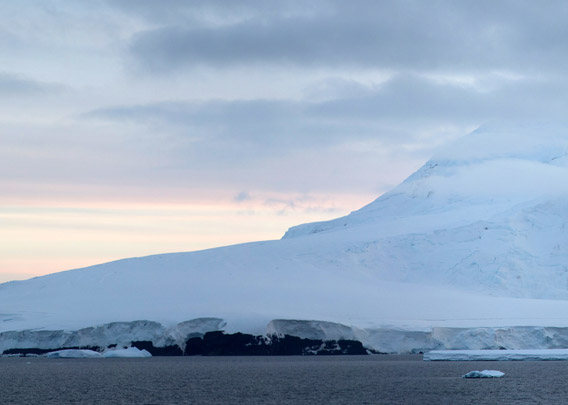 Peter I Island – 1/3 – No 360°-Panorama, flash-player required, on mobile devices for example the → Puffin-Browser.

It is easy to understand that essentially nobody is getting there. The first one who saw the island was an anonymous crew member on board HIMS Vostok on January 21, 1821, one of two vessels by the expedition of the German-Baltic seafarer Fabian Gottlieb von Bellingshausen sent out by Tsar Alexander I and named by Bellingshausen after Tsar Peter I (Peter the Great) although he (Bellingshausen, obviously) did not get any closer to it than about 15 nautical miles due to ice. 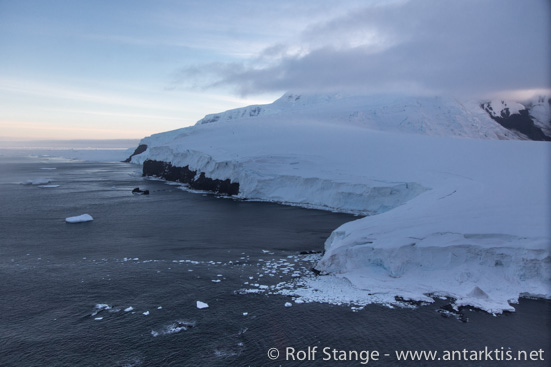 It took more than a century until a Norwegian expedition led by Nils Larsen and Ola Olstad managed to make the first landing on February 02, 1929. Peter I Island was on this occasion claimed for Norway, a claim that was turned into Norwegian law in 1931 followed by the island’s status as dependency in 1933. Once the Antarctic Treaty came into force in 1961 – Norway had was one of the 1959 signatory members – all claims to any land south of 60 degrees remains invalid as long as the treaty remains valid.

In 1987, scientists from the Norwegian Polar Institute spent a couple of days on the island, and since then, some 10-15 tourist ships have been there, and if we assume that about half of them managed to make some kind of brief landing, then it shouldn’t be too far off the truth. Peter I Island is far from all common shipping routes and is usually only visited on the rare occasion of an Antarctica semi-circumnavigation between South America and New Zealand. 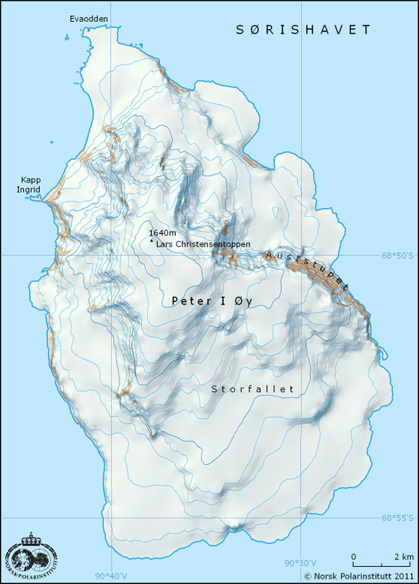 Some geography and natural history

Peter I Island is 11 kilometres wide (E-W) and 19 kilometres long (N-S) and has a surface area of 156 square kilometres, which is larger than Cambridge (115.65 square kilometres), but it has got fewer inhabitants. To make up for this, the island has got some significantly higher mountains, the highest one being Lars Christensentoppen (1640 metres) and is almost completely glaciated. All rocks are entirely of volcanic origin, having a basaltic chemistry. Those few samples that have been dated vary between 100,000 and 350,000 years, but the geomorphology of the higher parts suggest much more recent activity. The coastline is mostly a 40 metres high ice cliff. In those few places where the coast is unglaciated, the terrain is changing chickly due to marine erosion and rockfalls. There are only very few beaches potentially suitable for landings.

There are some small seabird colonies, mainly with Antarctic fulmars and Wilson’s storm petrels, but the hostile topography does not provide much suitable breeding space. Penguins (Chinstraps and Adelies) and seals (Elefant, Crabeater and Weddell seals) are regular visitors to the small, steep beaches in significant numbers.

During a visit in January 2013, the present author and owner of this website made a 360 degree panorama on the ice cap near Cape Eva, the northern end of the island. The landing was made by helicopter at an altitude of about 100 metres. The result are technically not as good as one might want – it was still in the very early days of my career in panorama photography – but it is the very first 360 degree panorama ever taken on Peter I Island. Hooray! 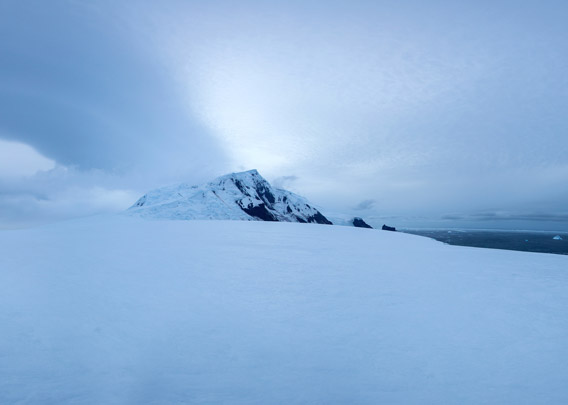