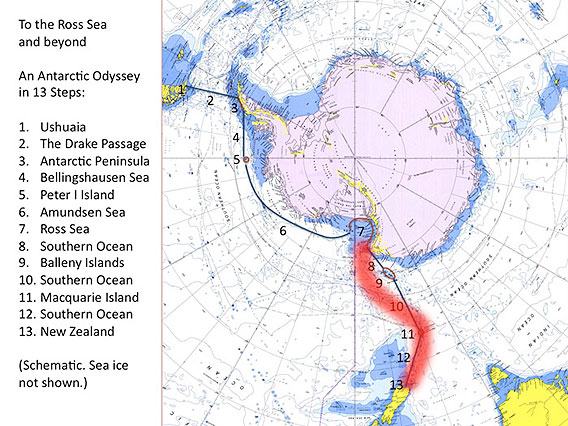 Getting through the drift ice of the northern Ross Ice on the way out again was a much quicker affair than on the way in. On hindsight, everything is easier. The ice charts that we had proved to be amazingly misleading, we found up to 50 % ice where it should have been clear on the way south. But anyway, that is a matter of history at this time.

In the evening of 09 February, we passed tiny Scott Island, but there was not the slightest thought of going ashore in the kind of weather that we had. From then on, the days across the Southern Ocean brought mainly an impression of the vast distances and the wild weather of those latitudes. We had winds around force 6-7 on the Beaufort scale for days on end, which is not too extreme, but it was enough for most of us over time. And yes, it did go up to force 11-12 occasionally.

Once we had reached Macquarie Island, initially it seemed as if the weather wanted to make our lives difficult also there, but we were lucky and managed 3 excursions, including 2 landings and 1 zodiac cruise. That is everything that is legally possible. Good stuff!

Macquarie Island is the equivalent of South Georgia on this side of Antarctica. Smaller, less mountaineous and not glaciated, the green and grassy slopes appear to those who are just coming up from the Ross Sea as a tropical rain forest. And the wildlife reminded very much of South Georgia, this subantarctic version of Dr. Doolittle’s not at all so little zoo. Elephant Seals, King penguins in very substantial numbers, the associated species range of seabirds including Giant petrels, Skuas and so on … and of course the endemic Royal penguin ☺ We had ample time to spend with these amazing creatures in Sandy Bay, even in sunshine! And compared to McMurdo Base, the crew of the Australian station was really friendly.

Since 1997, Macquarie Island is, by the way, an UNESCO world heritage site. And the reason for this is actually not the wildlife, but the unique geology. Most oceanic islands are tops of submarine volcanoes. „Macca“ is, however, a piece of oceanice crust that was pushed upwards due to tectonic forces. The chance to put your hand on oceanic crust that is part of an active plate and not some fossil stuff is unique on a global scale. It is, however, something that does not catch the eye readily unless you are a specialist. What you do see are pillow lavas, which is the shape that basaltic lava often has when poured out under water. This is, however, something you might find in any volcanic environment influenced by water.