18th-20th January 2015 – As Shackleton said, the most important character feature for every polar explorer is patience. Now we are not talking about spending a long antarctic winter together in a little hut, squeezed around a far too small table with permanent darkness and long blizzards outside. But some days at sea are enough to make the inner clock turn a bit slower. Some may have difficulties with it, but I think, most of us are actually enjoying it. At home we are always on to something, always online, 24/7 workloads, permanent stress. How often do you have the luxury to watch waves for hours on end, waiting for the occasional Cape or Giant storm petrel – they have become a bit rare these days – passing by? One of these days, even a mighty Wandering albatross was seen during the early morning hours. Far south of the convergence, but there is no way too long for these eternal riders of the southern winds.

Still, every day is different. One day, the wind was strong enough to be disagreeable for some, one day was grey, the outside world hidden behind a curtain of snow. One day, it was after leaving Peter I Island, we had pods of Orcas several times, and today early morning, there were Minke whale backs breaking through the waves, catching some rays of the rising sun. 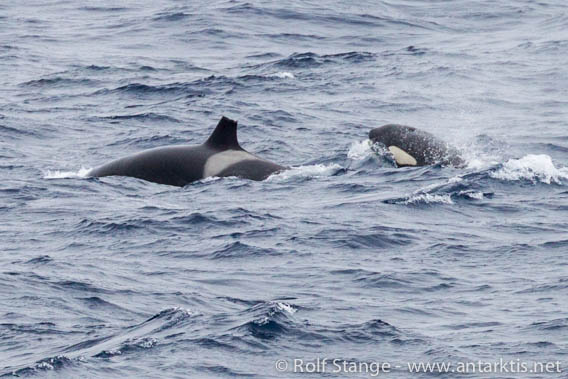 Of course we are having a series of lectures and films. Michael has explained the various subtypes of Orcas, and Victoria is telling the stories from the earlier years of exploration. Stories? Heroic adventures! These are only a few examples, we have got quite a range of stuff between us. But I have to rave on a little bit about Victoria Salem’s history talks. They should become a TV series. I am not a TV junkie, but I would turn it on. High frequency rhetorical artistry, every seemingly casual sentence a punch line with high-grade history flavour. 40 minutes that feel like at least one well-researched history book. Looking forward to more 🙂