15th-17th January 2015 – From here on we really start our antarctic Odysseey, the seemingly endless distances around a good part of the continent. Many hundred nautical miles over open sea. The coast remains far away and out of sight, and so does the pack ice. This is how it should be. If we start making endless curves and bends already now, then we will never get anywhere. Time our most precious resource now.

And it is passing quickly. Sometimes with a breeze, sometimes without, but it is generally with quite calm seas these first days across the Bellingshausen Sea are going by. When the wind is blowing, many like to be out on the open deck, because then many of the beautiful Cape Petrels are gliding around the ship, in seemingly endless numbers. It is probably a limited number of individuals that are always coming back in circles, visiting the ship every couple of minutes, but it must still be some hundreds of them. Sometimes, they will sit on the water for a moment, dip their head into the waves and then take off again with a few running steps on the water, the maneouvre that has given the petrels their common name, after St. Peter from the bible, who also tried to walk over water, slightly less successful than his boss. In contrast to St. Peter, the petrels don’t sink into the water, but are soon flying up in the skies again, with some more krill in the s tomach. I have never seen krill in the stomach from a moving ship. If I was depending on finding krill, I would long have starved to death. But what looks like a desert of water to us, is a rich table for these seabirds. 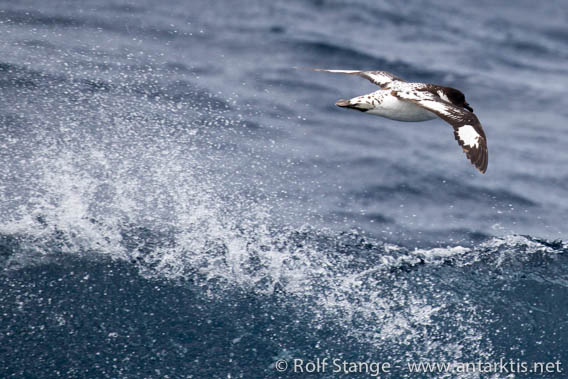 The super-remote island of Peter I remains hidden behind clouds and waves. We spend a few hours near this now almost invisible island. Once, we put a zodiac on the water to find out what we actually already know: the sea is too rough for us to board the zodiacs. Every few seconds the platform of the gangway is either hangin high above the water or disappears inside a wave. From the boat you can see what it is really like, it looks less dramatic from deck. This does simply not work, not today, not in these conditions. So we wave goodbye to this lonesome, desolate island and continue our journey westwards. We can’t do anything against wind and ice, human desire is nothing against the forces of nature. This can occasionally be disappointing and difficult to accept.