Who does not dream of an island of her or his own? This dream can come true soon in the Falkland Islands, where Pebble Island is now for sale. It is not just any small island, but the 5th largest island of the whole Falklands, just outsized by Weddell and Saunders Islands and, of course, the two main islands, West and East Falkland. Pebble Island has an area of 10,622 hectares or 103 square kilometres.

There is a tenant farm on the island with 6000 sheep and 125 cattle as well as some simple accommodation for tourists. The farm as established as early as 1846 when Pebble Island and 3 neighbouring islands were bought by John Markham Dean for a mere 400 pound. A supply ship comes every once in a while and there is a little runway for flights from Stanley (45 minutes flying time). 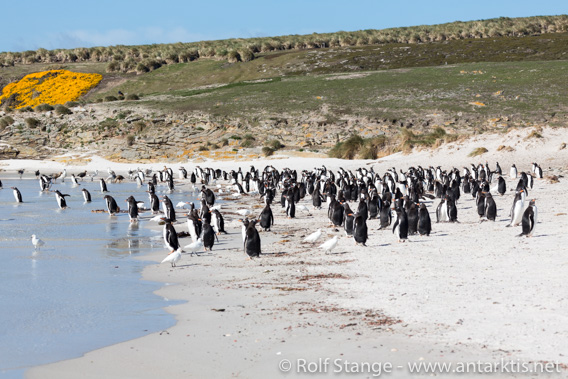 Pebble Island was occupied by several hundred Argentine soldiers during the Falklands war in 1982, it was the site of the first combat operations on land in the Falkland Islands. The wreck of an Argentine aircraft and memorials to British sailors and soldiers who died after the bombing of HMS Coventry close to Pebble Island remind of these dark times.

Pebble Island is an important bird area. An impressive number of species is breeding there, including several thousand penguins (mainly Southern Rockhoppers and Gentoo penguins).

Claire Harris, descendant of John Markham Dean, has announced to sell the island. Offers can be made now until January, there is no minimum. But it is safe to assume that the buyer will have to put a bit more on the table than the 400 pound paid by John Markham Dean in his days.