10th-11th January 2015 – God has put the Drake Passage between Antarctica and the rest of the world, and this seaway has got its bad reputation for good reason. But it is not at all living up to its reputation now, you hardly feel that you are on a ship, to our great satisfaction. You could play billard, something which is not usually associated with ships at sea. No reason to complain, in other words. Those who wanted to could even get sunburnt on deck yesterday, while there were relatively few birds around the ship. They are more numerous today: Wandering albatrosses of different age stages, as the plumage makes clear: the brownish ones are juveniles, while the mostly white ones are fully adult. In addition to that, there is a nice cross section of typical species for the area around the ship, including the small Wilson’s storm petrel with its very lively flight, the beautifully patterned Cape petrel, the occasional White-chinned petrel and the majestic Wandering albatross at most times. Many of us are out on deck, enjoying the Southern Ocean and its inhabitants, trying to capture them on memory card. Call yourself happy if you have got a fast camera J

It is noticeably colder now, during the second day of our crossing, the cold is making itself felt through thin clothes, and the visibility is occasionally decreased by snow showers. Antarctica is clearly getting closer. Meanwhile, we can see the first whales, a group of 7-8 Fin whales, swimming above a 3,000 m water column.

You wouldn’t expect to be forced to do some vacuum cleaning on an antarctic expedition. But you are. Taking unwanted organic matter to Antarctica, such as plant seeds which might introduce new species to this remote environment or bacteria or viruses that could bring diseases to the wildlife there, has to be prevented by all means. What means some minutes of cleaning work weighed against the risk of bringing „aliens to Antarctica“.

Unnecessary to mention that these sea days are broken up by regular lectures, introducing the „birds of the wind“ or the whales of the Southern Ocean and of course mandatory events including environmentally friendly behaviour in Antarctica. 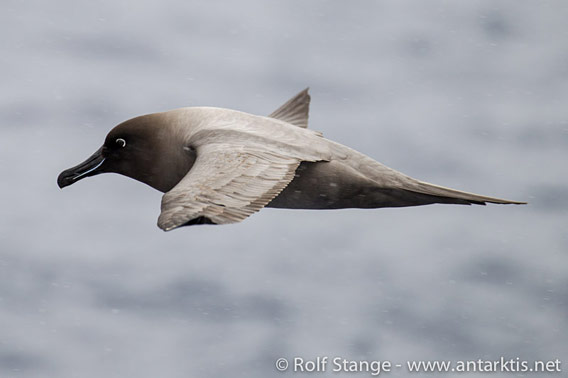 Snow showers are getting more frequent in the afternoon, while we are doing the vacuuming session. Cape petrels are around the ship in numbers, and a beautiful and elegant Light-mantled sooty albatross is making wide circles around us, coming near every couple of minutes, while the excitement on board is rising with every mile that we are getting closer to the South Shetland Islands.