Hooray – Land! We have been at sea for just two days, very calm days, nothing compared to the long legs that are to come later in the trip. But it is always great to arrive somewhere. „Somewhere“ is th South Shetland Islands in this case, a group of islands off the northwestern Antarctic Peninsula, neighbouring the Drake Passage. As you might imagine, the weather is usually sh … here, and optimism was limited last night as I went to bed and the islands were mostly hidden behind curtains of snow.

And indeed, the wind was a bit adverse when we approached Halfmoon Island in the middle of the night, so Captain decided to drop anchor not in the usual by of the island that bears its name for a reason, but behind it – the dark side of the moon, as one might say. Turned out it wasn’t the greatest position for our Zodiac operations when we started: a longish ride into the waves, and my colleague Dima and I spent quite some time in (moderate) surf, handling Zodiacs while we were getting everybody ashore. At 5 a.m., as shouldn’t go unnoticed. Well, sleep is generally overrated, and so is breakfast. But who cares about sleeping and eating when you can spend the early morning walking around on an antarctic island in the vicinity of Chinstrap penguins? They are the loudest, dirtiest, liveliest and baddest-tempered amongst the antarctic penguins. Amazing creatures, like all the wildlife down here. Very entertaining!

And a lonely Maccaroni penguin in the middle of one of the colonies. Whatever he was doing there, he must have been feeling like a horse in the middle of a herd of cows, but he did appearently not mind, as he was standing there happily with his big, red beak and his lovely yellow-golden haircut. Good for us, as we are unlikely to see this species again on our trip, and we would certainly have missed something we we hadn’t seen this peculiar, rather sub-antarctic penguin. All this with the grand scenery of the islands of Livingston and Greenwich in the background. Hard to leave … but then there were rumours about breakfast on the ship, something that came as the icing on the cake of a great early morning. Don’t believe anyone who pretends breakfast isn’t important. 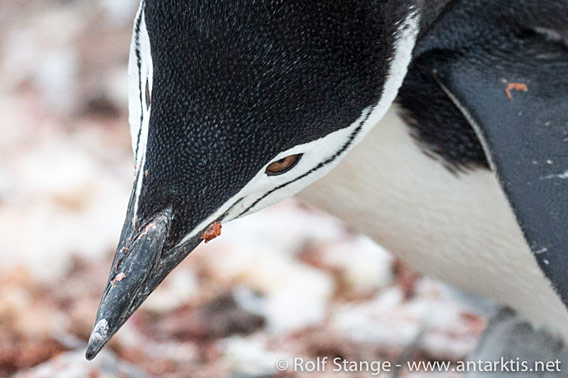 On the rare occasions when Livingston Island is stripping off its usual cloud cover, it is just great. A few small clouds for decoration purposes near some of the higher peaks, mostly blue skies over Bransfield Strait, warming sunrays on the skin and the blow of Humpback whales quite regularly not too far from the ship. A mother with calf, swimming their way in a relaxed manner, hardly taking notice from us. Unforgettable hours! 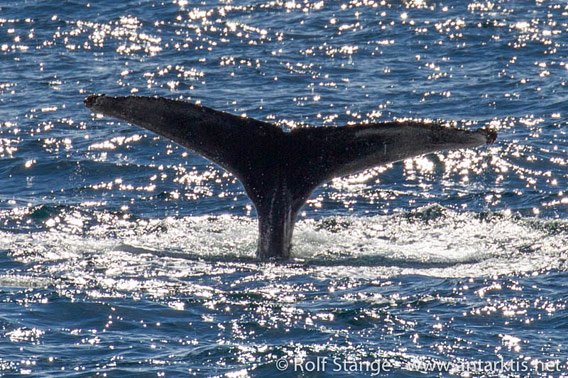