It is part of a polar traveller’s life to return to the same place again and again. Of course there are those places where you are getting blown by the wind only once in a lifetime. Others are routine. Most are something inbetween. And occasionally, as I have to admit, there are those places I could well do without, at least sometimes.

Deception Island is amongst the letter. The island has got its name for good – or rather: bad – reason. Who cares that nobody really knows anymore what that reason was. Anyway, too often you feel deceived for the precious time after a visit there. But everybody knows this famous island and almost everybody wants to go there.

Not so today. Already the approach was an antarctic delight, a light breeze under a bright sun, the rim of the caldera of Deception Island ahead of us in full width. The entrance, known as Neptune’s Bellows, is such a thing in itself. It is quite narrow, and to make bad things worse, mother nature placed a rock in the middle of it, probably in a moment of bad temper. This rock has cost some ships more than just a scratch of paint.

The Norwegian whalers used to be tough people. Put a whaling station there, on a plain of black volcanic sand. Those who think that it is generally calm inside this seemingly well-sheltered natural harbour will soon be disappointed (decepted, isn’t it?), and I don’t want to know what it was like to spend the day up to the waist in whaleblood and –oil, in almost constant wind, cold and a natural sand blower. 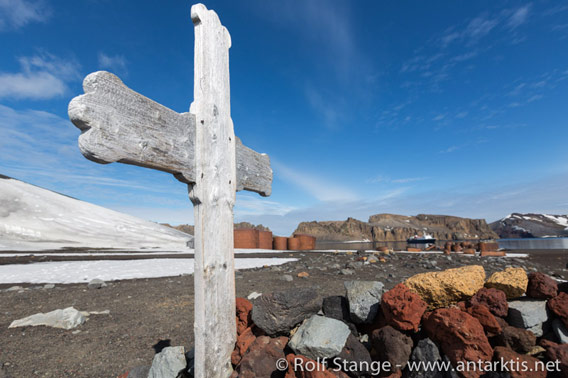 Little is left of all this, or of a station that was built here later by the British. Volcanic eruptions that went together with ashfalls and meltwater torrents turned it all into splinters.

On a normal day, which means in windy, cold, grey weather, most will be done rather quickly here and happily be back on board sooner rather than later. But life is good here on a rare sunny day. Of course, I am supposed to enjoy it in any kind of weather and always to capture some good pics, but … nothing, it is simply less fun in bad weather. Period. But today, there are so many larger objects and small details that catch the eye and the photographer’s attention. The combination of decaying buildings, rusting early 20th century industrial remains and antarctic nature in a volcanic setting is indeed unique. Starting with colourful volcanic rocks lying on black ashes to lonely patches of mosses and the old airplane hangar (it took ages and almost burying the camera in the ashes to get that photo right) to the few remaing graves (dito).

Considering that the earlier described visit to Halfmoon Island was actually also today, you will agree that it was a great day.