The Lemaire Channel ist amongst the most famous bits of Antarctica. Thousands of tourists cruise every southern summer through this unreal waterway, a jawdropping experience. The Antarctic Peninsula to the left and Booth Island to the right. Mountains almost a thousand metres high and some quite impressiv glaciers to either side. The Belgian explorer Adrien de Gerlache, together with a young Roald Amundsen, was amongst the first who described the Lemaire Channel as a place that could make a visitor shiver in awe. That was in early 1898.

The actual passage is a few hundred metres narrow and from a distance one may wonder if there is actually a passage at all, and indeed, it can be blocked by drifting ice. There was a lot of ice, but far from being too much to keep us from passing through. Crabeater and Leopard seals were watching as Ortelius was winding her way through between the bergy bits and icebergs. 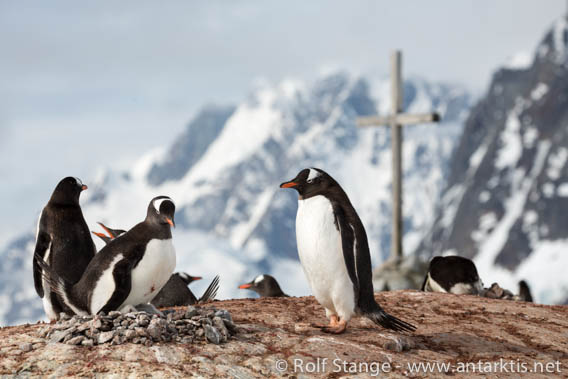 Most ships pass twice through the Lemaire Channel, once on the way south and then back again on the return journey. We don’t turn around, we rather keep going further south. Petermann Island, a common furthest south, is for us just a stepping stone on the way to the south polar circle. We were a bit worried that the small rocky landing bay might be blocked by brash ice, but were delighted to find the coast clear. I was to have the pleasant task of guarding the southern end of the island for a while, which was visited by nobody. Understandably so, as the main attraction, a colony of Adelie penguins, a new species for us on this trip, is on the northern end, a few hundred metres away. So I spent an enjoyable while sitting on a rock, a little island in a sea of deep snow, with breeding Gentoo penguins as my nearest neighbours, which are busy stealing stones from each others nests and feeding their offspring. They are breeding around a wooden cross that commemorates 3 British scientists who got lost in sea ice in the vicinity of Petermann Island a while ago. I don’t think anybody knows if they got lost on an ice floe that drifted away or if they broke through thin ice. Their bodies were never found. Even the penguins seem to bend their heads in front of the cross. 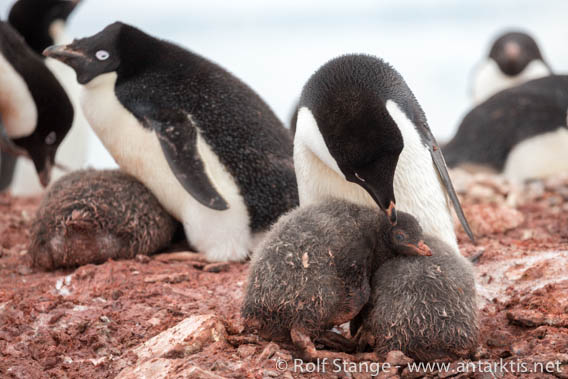 Gentoo penguins are near their southern distribution limit here on Petermann Island. This part of the coast of the Antarctic Peninsula, between 64 and 65 degrees south, is sometimes called the banana coast of Antarctica, as it is supposedly mild. Nothing is really mild here, it is a wild landscape of barren, mostly steep rocks and a lot of snow and ice, but on a fairweather day like today, it feels indeed warm.

Mild or not, we leave this coast behind us and set course for colder parts of Antarctica. 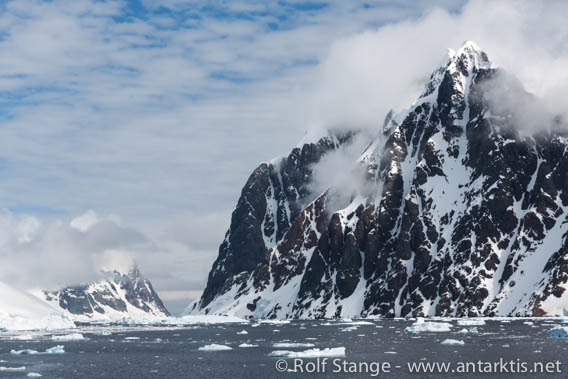