The well-known sounds and islands of the central Antarctic Peninsula, where we almost always know a sheltered place somewhere behind a corner, is now behind us, and we are heading into the more unknown. Well, not really unknown, but much less of a well-trodden path than we have been on so far. More difficult terrain at the same time: more open, less sheltered, more ice, no small bays giving protection, longer distances.

It became clear quite early on that the Fish Islands didn’t want us. At least early enough so we did not have to set the alarm clocks for 4 a.m. A second attempt during the later morning came to an end once we had reached a massive array of huge icebergs, guarding the Fish Iclands like giant ice demons. They clearly did not have any intention of letting us through, so we sneaked out again to try our luck elsewhere. The Fish Islands are just a number of small skerries, just big enough to support a population of Adélie penguins and Blue-eyed shags. We would find another interesting spot for us elsewhere.

Detaille Island was to be the next destination, but first of all we had to cross the magical line that separates high latitudes from even higher latitudes: the south polar circle. You can cross its northern equivalent conveniently by train, bicycle, car or bus, or in a plane, without getting to know about it. Here in the south, the club of those who have crossed the line is far more exclusive. That was clearly something that had to be celebrated duly, and our fearless leader Don had very distinctive ideas of how this was to be done. Maybe an old ritual from New Zealand? Who knows. Anyway, some of us looked like Maori chiefs after having completed the procedures duly. Well, almost. 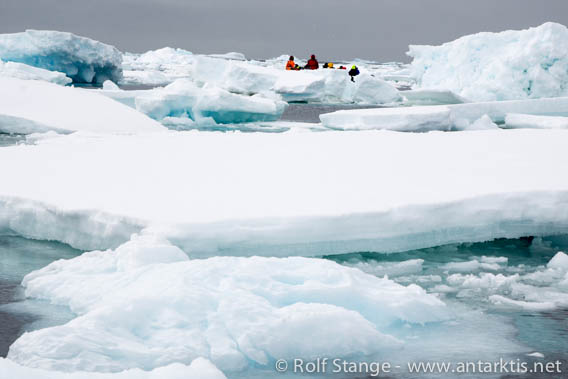 Again, nature had set her mighty ice guardians between us and the promised land. Not as gigantic as earlier today, but more than enough icebergs, bergy bits and sea ice floes to keep us from reaching Detaille Island and its historical hut. So we went into the Zodiacs and out into the ice and enjoyed it greatly. Blue colours of all shades, bizarre shapes, Crabeater seals resting on ice. A fine farewell to the Antarctic Peninsula. Then, we went out into the Bellingshausen Sea, heading for Peter I Island.