I might just write one sentence this time: we have seen a Ross seal. But some more sentences may be necessary to explain why this comes pretty close to a real jackpot.

If you travel to Spitsbergen, you will most likely want to see a polar bear. That is easy. Only those who really have done their homework might say: I’d rather see an Ivory gull or a Grey phalarope. That is a bit less easy.

This here is similar. If you take a trip to Antarctica, most likely you want to see penguins. And of course I don’t want to put down a lovely encounter with a curious Gentoo penguin, an experience that has made countless visitors to the Antarctic Peninsula smile for more than just a short moment. Or the Albatross, about which Robert Cushman Murphy said „I now belong to the higher cult of mortals, for I have seen the albatross“. That may be taking it just a little bit too far, but an exposure to such an amazing creature may actually make you feel that way.

The rarest animal in Antarctica is the Ross seal. After dozens of trips down here through 14 years, including the Ross Sea trip 2 years ago, I have now seen my first Ross seal today. And this includes of course everybody on board, also most of my colleagues, who all have countless antarctic seasons behind them. I believe that Don, our fearless expedition leader, came to Antarctica for the first time with Mawson. It is a while ago. And even he doubled his number of Ross seal experiences with that sighting.

A very rough estimate of the „global“ population is something near 130,000. That is not much. That is, actually, very little, considering the immense areas this population of a middle-sized city is spread over. Theoretically, you can find them everywhere around Antarctica, even on the coast of the Antarctic Peninsula. But I don’t know anyone who has ever actually seen one there. The Ross sea, that sounds like the Ross seal, you will either see it here or not at all. To find this treasured species, you will have to take this long, long trip down here. And when our Ross seal then finally slid past the ship on his ice floe, probably happy to be on his own again, everybody had a wide smile and more than one mentioned to me that this trip is now already a success. Well, of course we are looking forward to more, whatever the next days will bring, but this is definitely a very significant entry in the log.

By the way, the sighting of both the first Emperor penguin and the Ross seal have to be credited to Nick, a sharp-eyed fellow passenger from the Netherlands. Well done! (I feel I should add that we guides were busy with the dry-run of the helicopter operations). 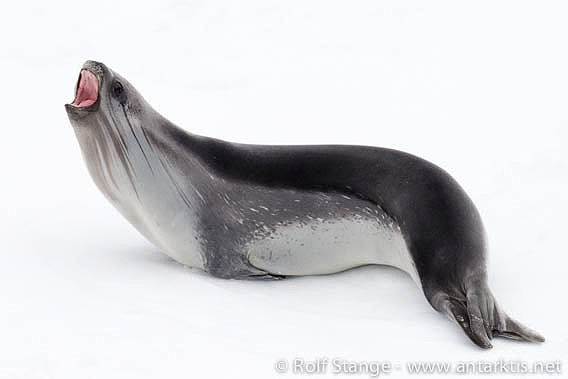 The Ross seal is the smallest of all antarctic seals, and quite peculiar with regards to its body shape with the unproportionally strong neck and the stripes in on the same part of its body. It is easy to distinguish, as soon as you have got a reasonable view of it. And nobody needed binoculars anymore when the ship was near her (his?) little ice floe.