The Antarctic is living up to its reputation of being a continent of ice this year. Well, it does not exactly come as a big surprise that the seas around Antarctica have ice. But it is indeed a heavy ice year, and it would be nice if the ice charts were a little bit more precise and reliable. We are now in the northeastern Ross Sea, 250 nautical miles northeast of the Bay of Whales, and according to the satellite-derived ice chart we should have mostly open water here. But one drift ice field is followed by the next one, and even though the average ice cover is no more than 2/10 to 4/10, we do have dense fields with larger, stronger floes quite regularly and need to maneouvre around them or carefully break through them. Not only is this a lot of hard work for the Captain (I don’t think he has left the bridge at all last night) and his guys, but it also slows us down considerably.

Yesterday evening, a snow shower decreased the visibility to almost zero, and when the curtain went up again, the ice was pretty dense in most directions. A first helicopter ice recce flight covered 60 miles (nautical) in our general southwesterly direction, achieving information about a navigable route, but not discovering generally open water. We are eagerly awaiting the further development. 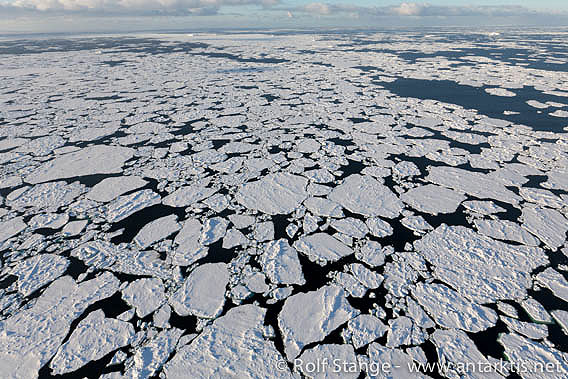 But the way is the goal (does that translate ..?). The wonderful world of the ice, including smaller tabular bergs every here and there, was lying around the ship last night, in the soft light of the antarctic midnight sun. Emperor penguins on the ice every now and then. The amazing beauty of the coldest end of the world.