We made another attempt last night to zodiac-land at Cape Royds, just to find out that Backdoor Bay was still as much filled with brash ice as the day before. So today was to be the day. We gave it an early morning start, dragged the helicopters out and soon the air bus shuttle service was in operation.

Cape Royds is at the foot of Mount Erebus, a very volcanic landscape with some peculiar erratic boulders of granite. A beautiful, if not slightly dark scenery, which can be very grim at times of bad weather, but just grand on a sunny day like this, and again Mount Erebus is looming clear from any clouds above the site of our excursion. Which is very appropriate, as it is from here it was climbed for the first time ever, during the expedition we want to pay hommage to now.

The Nimrod-expedition (1907-09) was the first one Shackleton was in charge of himself and certainly his most successful one ever. He almost reached the South Pole. Within less than a hundred miles from it he saw himself forced to give up and turn around, „better a living donkey than a dead lion.“ As mentioned, Erebus was climbed for the first time during the expedition and the south magnetic pole was reached, something James Clark Ross could only dream of in 1841.

The hut is smaller and less complex than Scott’s at Cape Evans. Tins are still standing on the shelves. All men shared one room, only the Boss had a little cubicle to himself, which he willingly gave to other expedition members who needed time for recovery. You can even find Shackleton’s signature on a wooden board. 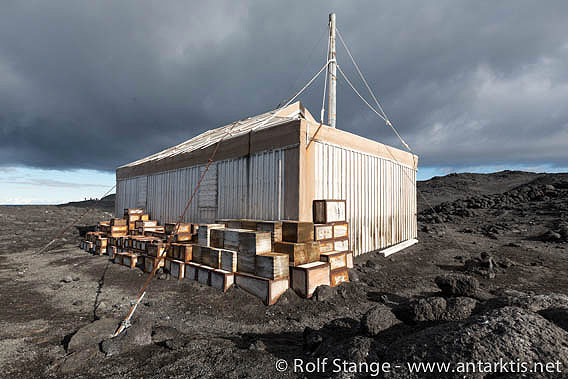 Adelie penguins are breeding a few hundred metres away from the Nimrod hut, they say it is the southernmost one anywhere. Maybe there are some more nesting at Cape Barne, a good stone throw further south, I don’t know.

Our little pre-breakfast excursion is indeed short enough so we, the guides, just make it back in time for lunch. It always takes a while in the end, as the very last helicopter can only land on the ship once the other one has been shut down, folded together and stowed away. Helicopter logistics are always quite an operation. But it was worth every minute. Even our penguin specialist colleague, not a polar history lunatic or a Shackleton groupie, agrees. Cape Royds would be worth a visit even without the historical hut. 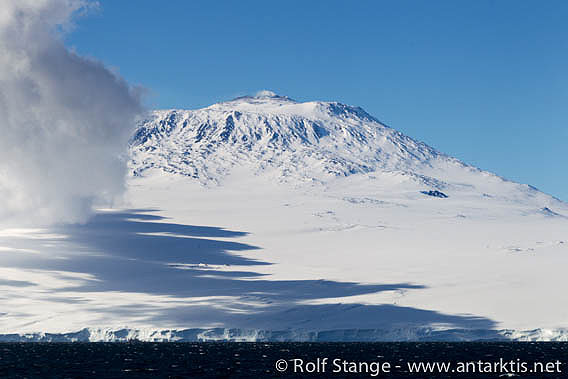 After an early start and a long morning out, it is a quiet afternoon on board as we are sailing northwards, leaving McMurdo Sound behind. The few precious days there are over for this time, as always too short, but spoiled with amazingly good weather. Mile after mile through calm, open water, with great views of Ross Island with all 3 major peaks at the same time: Mount Terror, Mount Bird and Mount Erebus, this famous trio of glacier-covered volcanoes. How often can you see them so beautifully?