Photo galleries and triplog of the Ross Sea voyage with MV Ortelius in January-Februar 2015 are already online. Now, the first of several panorama series that have been taken during this trip is published. At Cape Evans, I had the rare opportunity to take panorama photos inside Scott’s hut from his last expedition with Terra Nova (1910-1913) and of the surrounding landscape. The results can now be seen on this website (click here). 10 panoramas, 8 from inside the Terra Nova hut and 2 landscape panoramas of Cape Evans, can be viewed both individually and as a virtual tour, taking the visitor online through all corners of the hut and around at Cape Evans, where you can see Mount Erebus, McMurdo Sound frozen between Cape Evans and Hut Point further south, with islands including Razorback Island and Inaccessible Island that are known to those who have read Scott’s diaries that were published as Scott’s last expedition. Short commentary comes along with the individual panoramas. Most of them are inside the hut, showing all parts of the famous base from which Scott went to the South Pole. It is well known that he and his 4 comrades died on the way back.

Screenshot of the virtual tour through Scott’s hut at Cape Evans. 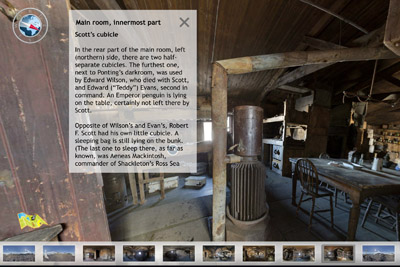