The Habitat Restoration Project of the South Georgia Heritage Trust (SGHT) is the highly ambitions project to eradicate rats completely on South Georgia. The island has been rat infested since the Brown rat was incidentally introduced by sealers and whalers, since then these rodents have spread over most parts of the island: a disaster for millions of smaller seabirds which are breeding there in the high tussock grass or in burrows, and their populations have been decimated drastically.

After rats and other introduced species had been sucessfully eradicated on other, though smaller, subantarctic islands such as Campbell Island and Macquarie Island (both south of New Zealand), the SGHT decided to attempt the seemingly impossible and get rid of rats on South Georgia, which is, however, much larger and has a much more difficult, largely alpine, terrain. But the glaciers help to make it possible, as they are impassable barriers for rats, separating the large island into a number of smaller areas which can be treated separately. But not forever, as glaciers are retreating rapidly on South Georgia, and it won’t take long until some have retreated far enough to expose beaches where rats can then move freely from one area to another. Then, the areas will be too large for a successful eradication. The consequence is simple: now or never!

The procedure to drop poisoned bait from helicopters is sophisticated, but generally well known from previous projects such as Campbell and Macquarie Islands. The teams involved there have now brought their knowledge and experience to South Georgia. Certain techniques, bait and good timing limit the number of other birds being poisoned by accident to a minimum. There is some mortality amongst species like Giant petrels and Skuas, but numbers are low and far from a level that might endanger populations.

A first testing phase in a smaller area was successful, and so was the first of the two main phases of the project in a larger part of South Georgia. Several helicopters are used to drop large volumes of bait during a strictly defined, very sophisticated flight pattern in short time periods when weather allows flying. Weather conditions during the first main phase were very challenging, but “team rat” managed to complete their task successfully after initially having been driven to near despair when strong winds and poor visibility kept the helicopters on ground for quite some time.

The project is scheduled to be completed in 2015. So, currently rats are still roaming on large parts of South Georgia, and many more flight hours are required to bring the work to a good end. Control of the rat population on a low level is not possible, it is either success in terms of an absolutely complete eradication or a total failure, nothing in between. In case only one pregnant female survives, the population would increase again very quickly and the effort would have been in vane. This means that the completion of the project cannot be postponed for a long time, also considering the rapid glacier retreat. First sightings of breeding South Georgia pipits in areas where they had not been breeding for decades is amongst the evidence for the success that has already been achieved, showing it is worth every effort to give the island back to millions of seabirds that had been breeding there for thousands of years until the sealers and whalers brought the rats.

Success will now depend on weather and, as too often in life, money: the immense logistics needed to move the team, equipment, bait and helicopters to South Georgia, where no helicopters are available, require large-scale funding in the order of millions. The South Georgia Heritage Trust appreciates every donation ( click here for more information on this ).

It is also possible to buy items which are nice to have and nice as presents to support the project, such as James McQuilken’s book The Mists of Time, the moving life story of Cymba, a Wandering albatross. The present author has translated this book into German as Die Nebel der Zeit to support the project. In 2014, sales of Die Nebel der Zeit raised money to support the work of the habitat restoration project on 2 hectares of South Georgia. Far from enough, but every contribution makes a difference! 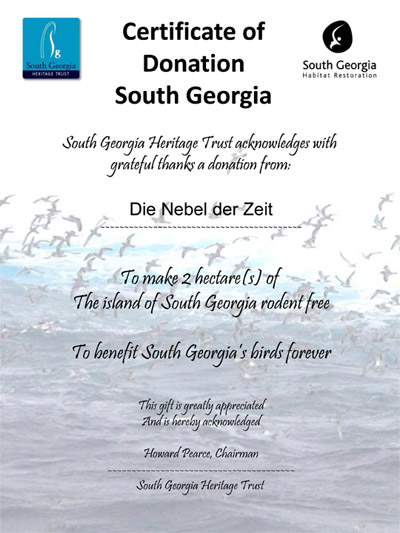 South Georgia pipit nest in Schlieper Bay. There and in other, large parts of South Georgia, they had not been able to breed for decades. 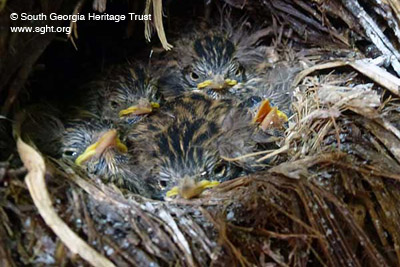