Halley VI: An antarctic research station has to move

In 2012, the British Antarctic Survey had built an ultra-modern research station, on the eastern side of the Weddell sea: Halley
VI. The five previous stations were either covered in snow or not safe to use anymore. Similar to the German research stationNeumayer III, where researchers moved in for the first time in 2009, Halley VI is situated on the shelf ice. Already Neumayer III was perfectly constructed for the prevailing conditions. It should be able to withstand the locally strong winds and drifting snow should not accumulate to the buildings. Since ice is moving, shear forces would act on the construction, too. Fore these reasons the building was erected on hydraulic legs, which gradually could lift it to the level of the current snow layer. However, the German base is fixed to the ice below. At the present location the station is drifting to the shelf ice edge
with a speed of 157 metres per year. The British improved their new construction, and in February 2012, a modular building on ski was ready to move in on the Brunt ice shelf. It can also be lifted hydraulically. Each year, 1.5 metres of snow accumulate due to either snow fall or snow drift. The approximately 150 metre thick ice shelf below Halley VI moves with a speed of more than 400 meters per year. To prevent the loss of the base over the years, heavy vehicles are able to move the individual modules on their ski from its location.

When Halley VI was used for the first time in 2012, several chasms in the shelf ice South of the station were already known. Almost one year later, after 35 years of inactivity, the chasms started to grow again. The crack closest to the station increased by approximately 1.7 kilometres per year. Last October, researchers detected a new fissure in the North. They worried about the station to be cut off from the mainland. Therefore, BAS decided for the relocation of the Halley VI, and the station would not be available for research for 3 years. Within that time, the transfer of the buildings should be
completed. During the Antarctic summer of 2015/16 scientists surveyed the area for a new location and a safe route for transport. It is about 23 kilometres further inland. Camps for fieldworkers and engineers will be build and the first modules are getting on the road during the current summer. The researchers hope that the base will be ready for work for the 2017 summer team. The supply route over the shelf-ice edge would then be extended to 40 kilometres. Better safe than sorry! 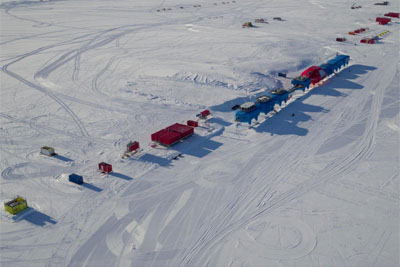