Kayak adventure in the Southern Ocean

Three young men have completed their their daring expedition last month, reported Foxnews. Two Chileans and a Spaniard paddled for eleven days within the South Shetland archipelago. They started their journey on January 20th in Punta Arenas, Chile. With the support of the Chilean coast guard, the three adventurers crossed the Drake Passage. Three days later they arrived at the Chilean research station Arturo Prat on Greenwich Island. With some delay they set out on January 28th. The kayakers traveled 20-30 kilometres per day. They explored the islands and met a pristine and unique nature. Their route led them along waterways, which no ship can sail on, because of the prevailing shallows.

The following section is a summarised translation from their blog entries.

After 22 miles we turned into McFarlane Strait. Here we were stopped by 35 knots of wind. We had to take shelter in Yankee Harbour. January 31st, we crossed the strait in poor visibility. Fighting strong currents we reached Point Williams and faced a great scenery. The next day is still windy and despite a strong swell of the Drake Passage, we venture to Barientos Island. The following day is foggy again. We reach Robert Island only with the help of the compass. But here we find shelter in the Chilean refuge hut Risopatron waiting for the forecasted storm to pass. Also February 3rd is rather seriously. In spite of breaking sea we enjoy the basalt cliffs and a pod of Orcas on this short leg. The following day 25 knots of wind were pushing us towards Nelson Island. The high swell exhausted. Nevertheless, we were happy when we were arriving at our day’s destination. We approached Maxwell Bay after surrounding Nelson Island on the South side. On February 6th, just before the finish, we got soaked again by wind and waves. It was the coldest day of the expedition! However, next day we received a warm deserved welcome on the Chilean Base Frei.

Route of the Chilean kayak expedition.

The South Shetland Islands are a weather-exposed land mass in the Southern Ocean. Cyclones that pass through the Drake Passage often touch the archipelago. The stormy sea strikes almost unbraked the coast of the islands. This archipelago is as wild and rough as the continent. Only a small area is ice-free, the rest is buried under massive glaciers. Thousands of penguins and seals rest and nest here. Sometimes you can even see single Macaroni penguins or a stray Emperor. Aside the common Crabeater seals and Weddel seals also Fur seals and Elephant seals often occupy beach. Some places are even “green”. The reason are algae and in sheltered spots mosses and lichens.
The South Shetland Islands are of volcanic origin. The kayakers passed areas with steep basalt cliffs that are characteristic for the landscape here. As bizarre as the cliffs protrude from the water, the sea-bottom at these locations looks similar. This forms local wild tidal channels, but also high breakers when old swell hits the coast. The glaciers contribute to the local climate. Cold, strong winds often whistle through the narrow waterways between the islands.

Why are people looking for such superlative ventures? In 2000 three young Americans wanted to carry out a similar expedition. But they did not get further than to circumnavigate Nelson Island. They had planned for Livingston Island and Deception Island. The weather forced them to the shorter route. Ten years later, the New Zealand girl Hayley Shephard planned the circumnavigation of South Georgia. The weather put a spoke in the wheel of her plans too and she not even made it half way. What all of the kayakers had in common is the experience of nature in an inhospitable remote area. In spite of all the cold and the isolation it is stunningly beautiful and offers an surprisingly abundant wildlife. Hayley knew that. So instead of personal fame she wanted the public alertness for the state of the albatrosses of the South Polar Ocean. 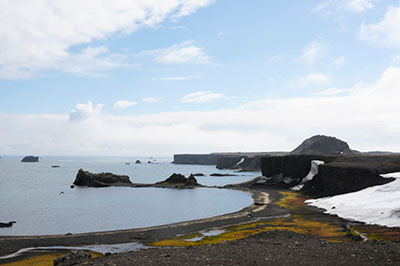