After the sunny hikes on the Isla Jungfrauen, we had to wait out yet another day while the storm was raging out there on open sea.

It was pouring rain for most of the day, so the on-board cinema was by far the best thing to do. 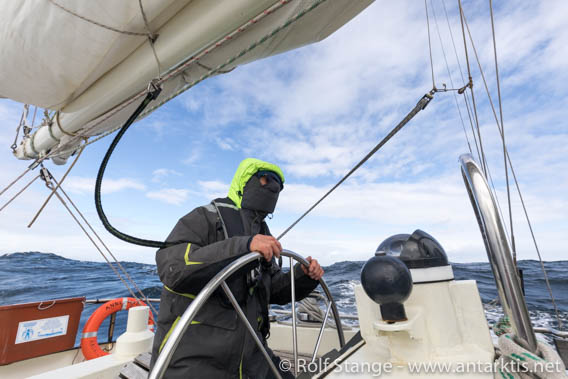 Wind, waves and Albatrosses: sailing at open sea around the Peninsula de Taitao.

Yesterday, we could finally set sail again. We have to get this next leg done, across the Golfo de Penas and around the Peninsula de Ta Ito. We still have 500 nautical miles ahead of us to Puerto Montt, and the days are going quickly.

Albatrosses have an enormous wingspan of more than three meters!

The open sea is always something people see with mixed feelings: some have to retreat to their cabins while others are enjoying wind and waves. Representatives of both groups are present on board. But the sailors and photographers amongst us had a lot to enjoy! We made good speed with up to more than 8 knots, wind and waves in constantly changing light conditions and many, many seabirds. From the small petrels to the Grea Albatrosses (Wandering, Northern and Southern Royal Albatross) and a lot in between.