A bit of a miracle has happened: I am on the train from Frankfurt to Dresden.

Yesterday it all seemed far away and somehow unrealistic, after all the back and forth of the days before. But suddenly things happened. Everybody booked flights as much as they could. Not exactly straightforward for many on board, and not exactly made easier by the means of communication we had available. Considering the whole situation, it is perfectly understandable if blood pressure and emotions are occasionaly steaming a bit when a booking website kicks you out during the payment process for the 100th time or of misunderstandings lead to expensive double bookings. But finally most seem to have got flights and it looks as if most if not all can travel home over the next 2-3 days. 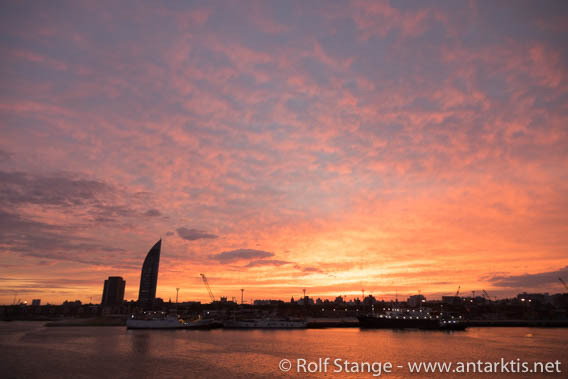 I happened to be in the first group that went, being a bit of a guinea pig for the „sanitaire corridor“. Which is actually a bus with the driver behind glass, an ambulance car and a number of policemen on motorbikes, and we went through Montevideo just as the president of a large country would have done. If you ask me then I would say that this might be a little bit exaggerated. Just leaving half an hour earlier would have done. But anyway, we got to the airport!

From there on it was just like any flight passage, just with face masks which were – at least during the „sanitaire corridor“ – compulsory for us. Less traffic in the airports than during normal times, but actually more than I would have thought. I am very curious what the new reality will look like for us who just returned from a long trip in the Antarctic. I guess more or less nothing will be as it used to be when we went on board, which was a couple of weeks ago and not a couple of years.

So, this voyage back home suddenly seems to come to a quick and happy ending. I keep fingers crossed that this goes for everybody who left yesterday or today or is still on board Ortelius or Plancius in Montevideo – we left actually together with the first disembarking passengers and staff from Plancius. Fingers crossed for everybody! I wish you all a good, safe and quick trip home!

To make one thing clear: this was obviously not a miracle (although it feels like one right now) but the result of endless negotiations on many channels and levels. A big thank you from me to Oceanwide Expeditions!