New statistics for tourism in Antarctica

The International Association of Antarctic Tour operators has published new statistics of tourism in Antarctica. Numbers for the now finished 2013-14 season are not finalized yet, but preliminary figures indicate a stable development without major changes from previous years. In the 2012-13 season, a total of 34,316 tourists visited Antarctica, a figure not expected to change too much for 2013-14. According to a prognosis for 2014-15, expected visitor numbers of 36,545 indicate a future growth of 6-7 %.

There have not been large fluctuations since 2009-10: visitor numbers have largely been stable between 34,000 and 36,000, with the exception of the 2011-12 season, when numbers dropped down to 26,500 following the ban on heavy oil as ship fuel in the Antarctic Treaty area. As a consequence, some larger ships dropped Antarctica as a destination. A good development from an environmental perspective, considering the potentially dramatic consequences of a spill of heavy fuel/crude oil.

Out of about 35,000 tourists visiting Antarctica, a large majority of 71 % is travelling to the Antarctic Peninsula with small to medium-sized ships with fewer than 501 passengers. These ships offer landings to their passengers. As the maximum number of tourists ashore is limited to 100, ships with more than 100 passengers offer a rotation system.

Ships with more than 500 passengers do not offer landings, they constitute the “cruise only” category, which describes exactly what they are doing (and what not). 27 % of antarctic tourism is cruise only.

The proportion of those who visit the interior of Antarctica by flight is small, numbering about 1 %. This includes visits to the South Pole and mountaineering expeditions to Mount Vincent, the highest mountain of Antarctica.

Expedition cruise ships at the South Shetland Islands: this is how most tourists visit Antarctica. MS Nordnorge to the left, MV Grigoriy Mikheev (not operating anymore) to the right. A governmental supply ship in the background. 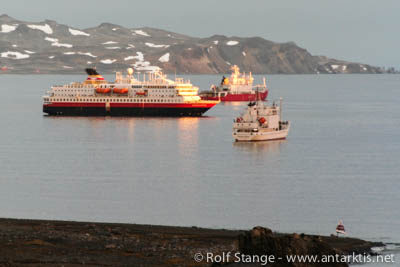