Uplift of the northern Antarctic Peninsula: result of tectonics and ice loss

The process of land uplift as a consequence of loss of large ice masses is well known from northern Scandinavia and Spitsbergen, where traces of such events including raised beaches can be seen in many places. In Antarctica, it is more tricky as there is not much ice-free land.

Precise GPS-measurements have revealed recent uplift dynamics of the northern Antarctic Peninsula. And not just that: while uplift was almost negligible with 0.1 mm/year until 2002, the value jumped up to 8.8 mm/yr – an increase by a factor of almost 90! This is remarkable, both in terms of the development and the absolute value of present land uplift: nearly 1 cm/year is very fast, geologically speaking.

The collapse of the Larsen B ice shelf in 2002 has been assumed to be the main driving force behind the land uplift: immense volumes of floating shelf ice broke off the east coast of the Antarctic Peninsula and floated out into the Weddell Sea as large tabular icebergs. The loss of formerly land-based was a consequence of the loss of the stabilizing ice shelf. The result of such an immense loss of weight is isostatic rebound of the crust, leading to land uplift.

Geophysical modelling has now shown the ice loss to be insufficient to explain rate and development of land uplift as observed. Movements in the mantle, at 100 km depths and lower, need to be taken into account to explain the data fully.

The Bransfield Strait, a small oceanic basin separating the South Shetland Islands from the northwestern Antarctic Peninsula, is a tectonically active area. There are several volcanoes in the area that erupted very recently in geological term, and several fracture zones and plate boundaries.

Penguin Island: a young volcanic island in the geologically active Bransfield Strait. Next to volcanism, land uplift is another consequence of these tectonics, amplified by recent deglaciation of the Antarctic Peninsula. 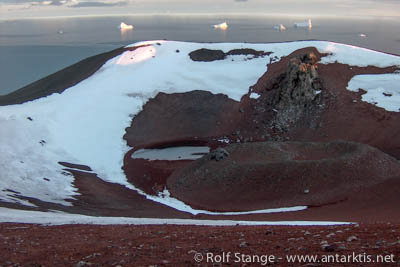