They can’t just let it be: Japan’s conservative prime minister Shinzo Abe has declared to plead for a continuation of Japanese whaling. In early 2014, the highest UN court had declared Japanese whaling in its current form for illegal, as it is declared as scientific whaling, but is far from meeting any requirements to qualify as such. The verdict has, however, left the possibility open to organize a new whaling programme that could meet the requirements, which include a stronger focus on non-lethal methods and relevant publications.

Abe is quoted saying that he wants to strengthen scientific research on whale populations and thus achieve new commercial whaling – remarkable how “scientific” and commercial whaling are connected in the perspective of the Japanese government. Abe also expressed it is sad that eating whale meat is not internationally recognized as part of Japanese culture. This part of Japanese culture does, however, enjoy only limited popularity even in Japan: demand for whale meat is lower than supply, despite commercial and even governmental promotion.

Minke whale in the Antarctic Peninsula. In 2005, Japan killed about 3500 Minke whales for “scientific purposes”. 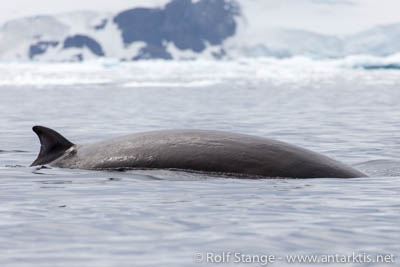