The Thwaites Glacier in West Antarctica has recently attracted considerable media attention, as scientists have predict it to collaps largely in the future. It is up to 4 kilometres thick and large enough to contribute with 1-2 metres to global sea level rise – a dramatic value. So far, warm sea water has been made responsible for glacier melting on the coast, but now there is evidence that a significant part of melting actually takes place at the glacier base, away from the coast. Thwaites Glacier is largely based well below sea level, as is the case for large parts of the West Antarctic ice shield, a fact that contributes to its lack of stability.

Timing and duration of a collaps are, however, currently unknown, even though it seems widely accepted amongst scientists that a collaps is very likely. But one of the main influences on glacier dynamics were so far unknown: the geothermal heat flux from the underlying crust to the glacier ice. Until now, it has been believed that geothermal heat transfer is evenly distributed over the area of the underlying crust.

Scientists of the Institute for Geophysics of the University of Texas at Austin have now revealed that this is anything but the case. Subglacial meltwater movement under the Thwaites Glacier was mapped with radar-based methods. The result is that meltwater production is very unevenly distributed. This can be used to calculate the geothermal heat flux under the glacier, which reaches values up to 200 milliwatts per square metre while averaging near 100 over the whole area. In comparison, the average value for all continents on Earth is just near 65 milliwatts per square metre.

These values of geothermal heat flux are considered “significant” for glacier and ice sheet dynamics. The Thwaites Glacier is accordingly loosing large volumes of ice due to melting at its base. The geothermal heat flux is not influenced by climate changes, as opposed to melting that takes place near the coast, in the contact zone with sea water which is getting increasingly warmer.

It is the geology which is responsible for sub-glacial melting. Western Antarctica is geologically active. Scientists believe there is a rift system under the ice, similar to the Rift Valley of east Africa. This rift system involves increased magma movements in the crust and possibly volcanism at the glacier base, similar to volcanoes in Iceland.

Don Blankenship, scientists of the University of Texas and one of the author of a recently published study, described the Thwaites Glacier as follows: The glacier “sits on something more like a multi-burner stovetop with burners putting out heat at different levels at different locations. … And then you plop the most critical dynamically unstable ice sheet on planet Earth in the middle of this thing, and then you try to model it. It’s virtually impossible.”

But of course scientists are trying to model the Thwaites Glacier to predict its future dynamics. The new knowledge about geothermal heat flux under the glacier will be a very valuable contribution to new models.

Glacier in the Antarctic Peninsula: a dwarf compared to the Thwaites Glacier. 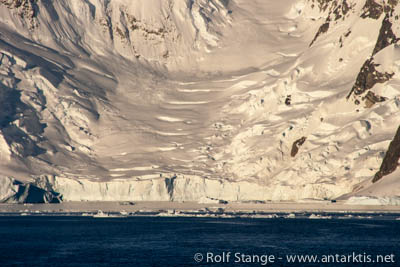